IV
Estark is a recurring monster in the Dragon Quest series and an antagonist in Dragon Quest IV. He is generally viewed as the Lord of the Underworld and is often one of the most powerful beings in the games he appears in.

Estark is a large demon armed with two swords and has a body that looks more like an insect's exoskeleton than flesh. He has three eyes and a somewhat crazed, open-mouthed grin and is generally portrayed as being golden brown in color, though his original appearance had a cerulean blue color scheme.

Though folklore within the games usually state Estark as having caused troubles in the past, he is almost always asleep when encountered and must be awakened in order to fight. In some cases Estark has been asleep for so long that he can only remember his name and nothing else, not even if he is a good or evil being.

He is the current Lord of the Underworld. A thousand years before the story begins, he used the Secret of Evolution to become the ultimate life-form, a being so dangerous for the world that he was sealed into slumber and entombed under Mamon by the Zenith Dragon.

Roughly three-quarters of the way through the story, the miners in Mamon accidentally uncover the tomb and awaken him, driving all demons wild with the return of their lord. However, the Hero acts quickly and leads his or her party into the catacombs to fight him. Estark is not fully awake yet and is thus much weaker than he would be otherwise - with his only resistances being 30% woosh and an immunity to crack. He has a 70% resistance to sap and snooze, but due to the way the game is programmed Meena's Kasnooze will put him to sleep 70% of the time.

Estark is a superboss that can be encountered in Estark's Labyrinth, the post-completion dungeon that players can find in Nadiria. As a superboss, he is extremely powerful, much more than the main antagonist of the game, Grandmaster Nimzo. Estark favors all out offensive attacks, pausing only to use Disruptive Wave. Having Multiheal or Omniheal is necessary to withstand the fierce barrage of attacks. He has no resistance to bang, frizz, or sizz, but has a 20% resistance to crack, 67% for woosh, and complete immunity to zap. Tempting as it is to go all out with offensive magic, it's better to cut into him with Blizzard Blades for extra damage. Furthermore, Estark also has a 33% chance to get hit with snooze, fizzle, and any stun technique. Kasnoozes unique programming will raise this probability, but be warned that Estark will awaken very quickly.

Upon first defeating him, Estark will allow the party to use his personal T'n'T board: "Stark Raving Mad." He is revealed to have a son called Starkers, who will join the party if they manage complete the board. If the player can defeat Estark in 15 turns or less, they will receive the Catas Trophy knick-knack.

Estark makes his appearance in the 3DS remake of DQ8, in a new area called the Memories Lane. This ancient maze allows for players to re-battle bosses from earlier in the game, with much higher difficulty, gaining rewards with each victory. Once they reach the end, the player will find Estark taking his usual nap. Once the battle begins, it becomes apparent that this is the strongest he has ever been.

He possesses a resistance to all offensive spells and skill elements, and complete immunity to all status afflictions save for slumber. Needless to say, Omniheal is going to see a lot of use during the battle.

Upon his first defeat, he gives out the Lord's bracer, with further rewards being 10 of a particular stat boosting seed.

Estark appears as a Legacy Boss, obtained after completing Quest #152 (or received at special events).

Estark appears as the boss of the Gate of Sleep, the gate of zombies. Although the dungeon theme is that of Dragon Quest IV, the surrounding area and his dialogue are based off of his Dragon Quest V appearance.

Estark is present as a rank X member of the Material family and the last member listed in that group. He is also the only rank X monster the player can obtain in the game outside of the Wildcard World Cup, though not until beating the game and the subsequent post-game challenge. Players can find him at rest within the sewers of Domus Isle. Once the key is Obtained, he must be battled in order for him to join the player's party. Amusingly, although awake when spoken to, Estark is asleep at the start of the fight. He can be synthesized using a Psaro and Beetlebully.

Estark can be fought in the post game on Cragravation in his cave. He is a very difficult boss that will join your team if defeated in 10 turns or less. 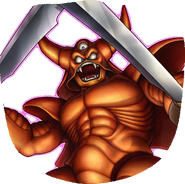 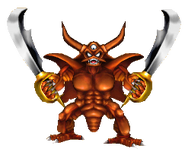 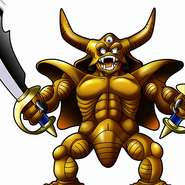 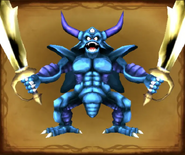 Estark in Dragon Quest of the Stars