The Falcon Blade (also known as the Falcon Sword) is a sword featured in multiple games in the Dragon Quest series. The sword is incredibly fast, allowing those wielding it to attack twice in a single turn. In later games, it can be upgraded into an über falcon blade.

The falcon blade has an attack bonus of +7. It can be purchased in Tuhn for 25,000 gold and can be equipped by the Hero and the Prince of Cannock.

The Falcon Blade has an attack bonus of +67 and can be won from the Endor Casino for 65,000 tokens. It can be equipped by the Hero, Ragnar, and Psaro. Psaro joins the party with a falcon blade equipped. Also, if the Pioneer town gets upgraded to a castle, you can find the Falcon Blade on the west side of the Castle on the ground. You can attack the same enemy twice with it, but won't carry over to a different monster. The Falcon Blade is expensive to get at Endor Casino as you have to bet at the monster arena for many hours before finally getting over 65,000 coins.

The falcon blade has an attack bonus of +67 and each strike hits for 75%, totaling up to 150%. It can be obtained by trading 35 mini medals to King Dominucus. It can also be found on the Nadiria and Stark Raving Mad T'n'T boards.

The falcon blade has the now standard attack bonus of +67, but only deals 50% damage per strike, and an appearance bonus of +32. It can be equipped by the Hero, Sir Mervyn, and Aishe.

The falcon blade has an attack bonus of +37 and returns to 75% per hit. It can be obtained from the Baccarat Casino for 10,000 tokens and can be equipped by the Hero, Angelo, and Jessica, provided she can equip swords. It can be upgraded using the Alchemy Pot with a meteorite bracer into an Über falcon blade.

A sword so fast, it can slice an enemy twice in a single strike.

Equipping this, or the improved version, doubles the number of swings taken when the wielder performs a physical attack. This means that a character who performs Falcon Slash while wielding one of these swords swings four times. 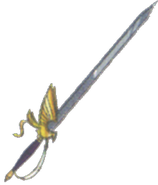 Falcon blade's artwork from Dragon Quest III.
Add a photo to this gallery

In Dragon Quest VIII, the Falcon blade (along with the Uber Falcon Blade) are used in conjunction with Metal Slash as a EXP Grinding technique on monsters from the Metal slime family.

Retrieved from "https://dragonquest.fandom.com/wiki/Falcon_blade?oldid=167855"
Community content is available under CC-BY-SA unless otherwise noted.