The fire blade (formerly flame sword) is a recurring sword in the Dragon Quest series. It is a powerful weapon that can unleash flames on the enemy.

The fire blade is a red European-style sword with a wavy red blade shaped like a flame. The hilt, handle, and edge of the blade are gold, and the blade has a blue and gold crystal in the center. In some illustrations, the handle is purple, while the hilt and pommel are light blue. Despite originated in the first game of the series, the fire blade has only made a handful of appearances in other games in the series.

The fire blade has an attack bonus of +28. It can only be bought at Cantlin by unlocking a door to the right side of the town. There will be a soldier there that sells it for 9800 gold, along with the Silver shield. The user will gain +28 attack when equipped. It can be sold for 4,900 gold. In remake versions of the game, the fire blade can be used as a tool in battle to cast Sizz, retroactively making it the first weapon that can be used as a tool. Due to text restrictions in the Game Boy Color remake of Dragon Quest, the fire blade was renamed to Flame with a symbol of a sword next to it. It is the most powerful weapon in the game besides Erdrick's sword itself.

The fire blade has an attack bonus of +87 and a style bonus of +33. It can be equipped by the Hero, Carver, Nevan, Amos, Terry, Lizzie, and Goowain. It can be purchased in Well shop south of Alltrades Abbey and Felonia for 22,500 gold.

The fire blade has an attack bonus of +87 and a style bonus of +33. It can be purchased in the Den of the Dwarves in the present for 22,500 gold and sold for 11,250 gold. It can be equipped by the Hero, Kiefer, and Aishe. When used as a tool in battle, it casts Bang. It also casts Frizz after attacking an enemy, hitting for half the original damage before resistances apply.

The fire blade provides a +20 style bonus when graded for the Excellence Grading Organization when equipped with the flame shield and flame armour.

A hot blade that spits forth flames if used as an item in battle.

The fire blade can be upgraded into the inferno blade after being combined with one Sunstone and three Rockbomb shards using the Krak Pot.

This weapon is made by tempering the Steel broadsword with 4 Monsterbone, 3 Iron Ore, and 1 Lava Lump. After this sword is tempered into the Wrath of Helios, it becomes available to buy normally in the weapon shop for 1620g. This sword also teaches the hero the Searing Slash Master Stroke.

The fire blade has an attack bonus of +39 and is enchanted with fire magic. It is created using a furnace and the recipe of: Orichalcum x 2+ Rockbomb shard x 5+ Coal x 5. 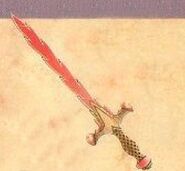 Old artwork.
Add a photo to this gallery

Retrieved from "https://dragonquest.fandom.com/wiki/Fire_blade?oldid=179742"
Community content is available under CC-BY-SA unless otherwise noted.