VIII
Gemon is a boss monster who appears in the Dragon Quest series.

Gemon's appearance is similar to the gryphon, dark gryphon and war gryphon monsters, but has three large horns.

Gemon is Rhapthorne's right hand man (Only outranked by Juggerwroth and Dhoulmagus) and a boss in Dragon Quest VIII. Gemon threatened to murder Empyrea's unborn child if she did not co-operate with Gemon. He has apparently sat guarding the egg for years in Dark Godbird's Eyrie.

Once Gemon is defeated, he kills Empyrea's unborn child in a kamikaze explosion attack. The child's soul then joins the player in the form of a stone. Merging with the Godbird's soul allows the hero and party to fly.

Gemon appears as the boss of Cragravation, along with his son Jamirus, who is fought before him. He appears near the summit where Melonie ran away to, and kidnaps her; claiming she'd make a nice "nest mate" for his son. Chasing him down results in the boss battle, with Mayday fighting against Jamirus. After the player claims victory, the duo flee after hearing a loud cry from above.

Gemon is a size 2 monster, and can be synthesized by combining a Jamirus with a Belial. He can also be synthesized alongside a Hargon to create Baramos. 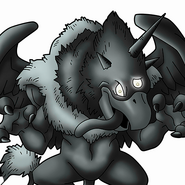 Gemon, as seen in Dragon Quest of the Stars
Add a photo to this gallery

Retrieved from "https://dragonquest.fandom.com/wiki/Gemon?oldid=186615"
Community content is available under CC-BY-SA unless otherwise noted.