Get rid of Dark Condor in Memoriam first because it's War Cry will prevent your party members from acting, effectively allowing Gemon in Memoriam and Dark Turkey in Memoriam to beat your party to death. After that, the battle will become far easier.

Gemon in Mem. awaits as The Hero opens a Purple Chest. 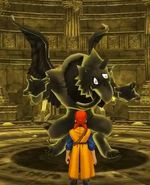 The Hero about to face off with Gemon in Memoriam.

Retrieved from "https://dragonquest.fandom.com/wiki/Gemon_in_Memoriam?oldid=178307"
Community content is available under CC-BY-SA unless otherwise noted.