Gittingham Palace is the penultimate dungeon in the story of Dragon Quest IX. It is ruled by King Godwyn and contains The Oubliette underneath its lowest basement. It is the central location in the Gittish Empire in IX. 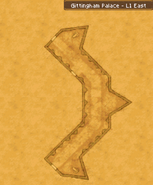 Level 4 - The throne room
Add a photo to this gallery

This is a location where the game can be saved after King Godwyn is defeated.

Retrieved from "https://dragonquest.fandom.com/wiki/Gittingham_Palace?oldid=189746"
Community content is available under CC-BY-SA unless otherwise noted.