Gleeba is a desert city in Dragon Quest IX. It is located in the center of Djust Desert, which is north of Dourbridge. It contains many similarities to other desert cities in the Dragon Quest series, particularly Helmunaptra. Its current monarch is Queen Voluptua. Queen Voluptua cares about nothing other than herself, therefore Gleeba's water supply starts to vanish, due to her strong liking of baths. After the Hero leaves Gleeba, the city changes for the better. Gleeba can be difficult to get to by boat if you are not familiar with how the boat works. You can disembark on the north-west corner of the continent just past the mountain range.

When you enter Gleeba, you find that they are on a water shortage because the queen is using it all for her bath chamber. You walk around and find that a peddler has given a golden fruit (the Fygg) to the queen as a gift. You then go to the Mirage Mahal to request an audience with the queen. She is in her bathing chamber. You talk to a man in the second floor, who says he will get you an audience with the queen if you find her lost pet lizard.

You go back down and talk to one of the handmaids, Misslei, and she asks you to look around the castle for Drak, the queen's pet lizard. You go to a tree in the northwest part of outside the Mahal and clap. This has Drak come out and you catch him. You give him to Misslei and she thanks you. Later, you gain the queen's audience. She looks bored.

Queen Voluptua asks you what you want, and you ask her for the golden fruit. She then says that she's going to have one of the handmaidens chop it up and throw it in to her bath, that she may even further perfect her beauty. She then leaves. She goes back to her bath and throws the chopped fruit in. The hero then has to find a way to get in. He/She goes to the top of the castle and talks to a fisherman. He says to jump into the fountain he is fishing from for a way to get in.

You jump through and land in there. Then you see Drak eating the fruit and then suddenly, he transforms into a giant monster. He carries Volupta into a well and jumps in. You follow and when you get to the bottom, the monster is talking to the queen. When he sees you, he thinks you are trying to take the queen back. He then engages you in battle. When you defeat "The Grand Lizzier", Misslei comes to see the queen. Voluptua then realizes she has many people caring for her, including Misslei and many others.

When she goes back to the Mahal, she resolves to be a good queen, and opens her bathing chamber to all the women of Gleeba. You also see a line of people who want to touch Drak, thinking he gives good luck. If you speak to Drak, you see he is behaving very nicely. You exit the city, ending the main storyline of Gleeba. 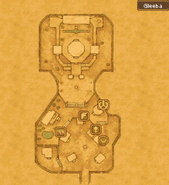 Mirage Mahal.
Add a photo to this gallery

Retrieved from "https://dragonquest.fandom.com/wiki/Gleeba?oldid=159997"
Community content is available under CC-BY-SA unless otherwise noted.