The gold golem is a monster who appears in the Dragon Quest series.

The gold golem is summed up by its name: it is a golem made out of gold bricks. Typically, it is the go-to monster for amassing quick cash, it usually being the weakest in the golem family.

Gold golems appear as rank D members of the material family and can be scouted within Palaish Isle's shrine, where they can be found on the second floor in the room with a coat-of-arms hanging on the far-wall, though their appearances are relatively rare.

Glittery golems who have the Midas touch -- and an explosive punch.

The Gold Golem appears in the plains around Yggdrasil. It drops 5 nuggets of gold when defeated. 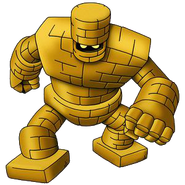 Gold golem's artwork for VIII
Add a photo to this gallery

Retrieved from "https://dragonquest.fandom.com/wiki/Gold_golem_(Dragon_Quest)?oldid=180515"
Community content is available under CC-BY-SA unless otherwise noted.