The golem is a recurring monster in the Dragon Quest series. Introduced in the first game as a boss, it has since appeared in several other instalments of the series, primarily as a normal enemy.

Golems are hulking man-shaped monsters made of clay bricks. This sums up most of their appearances with their face being the only other detail: a slit-like opening with two eyes glowing from the darkness.

Since the appearance of the first golem the species has solidified itself as a hefty force of physical might but one that lacks in resistance to spells. One of the most notable vulnerabilities of the golem is that of sleep-inducing abilities, an Achilles' heel that made the first golem easy to defeat and has since, for the most part, stuck with the monster as one of its more unfortunate qualities.

Golems are rank A members of the material family, but not the top A monster of that group. A Golem acts as the sentinel of the Xeroph Isle shrine and must be defeated in order to help the Incarnus reach its goal.

A golem is a monster found in Bemousoleum only at morning. It is a C rank monster that can be scouted to your team

Golems do not appear until near the end of the game, acting as mechs piloted by platypunk members of the Plob within the Flying Clawtress and can also be piloted by the player once unmanned. They are potent monsters, capable of delivering charging punches and hitting their fists together to ward off opponents that are too close for comfort. If one is already being manned by a platypunk, it must be struck with three Elasto Blasts before the pilot will be forced to disembark. These 'liberated' golems, and ones left unattended, can only suffer another three attacks before they go inoperable and explode, regardless of whether the player is piloting them or they are unmanned. Since they are too big and heavy to be knocked into the air and carried around, a chimaera wing must be thrown at them in order to send them back to town.

Golems can also be used in tank battles, though they act the same way as they do outside of these battles, meaning they do nothing more than stand idle until the player jumps in to command one, being somewhat disadvantageous since only two other crew members will be left free and even more disadvantageous if these remaining crew members are poor at handling the cannons. This aside, golems can be incredibly useful when it comes to sabotaging an enemy tank since their fist-clapping move can quickly break open the entryway of an enemy tank, and their charging punches can wreck a whole wall of machinery when positioned right and easily enable one to reach the enemy's engine when the time arrives, but they can still only deal with three attacks before being defeated. An exploding golem can damage the player both inside and outside of tank battles, so it is recommended to gain some distance when a golem has taken as much as it can.

A Golem named Briquet is the boss of Galantyne Glades.

A Golem dubbed "The Brick and Mortar Slaughterer" was created to protect the city of Cantlin, only to eradicate its citizens when they began to argue and fight among themselves. It appears as the final boss of the first chapter, intent on destroying the newly rebuilt Cantlin. 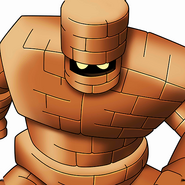 Golem, as seen in Dragon Quest of the Stars

Golems are beings from Jewish folklore, often portrayed as servants animated from clay that obediently carry out orders but often to warped or far too literal extents.