Goresby-Purrvis is one of the lieutenants of the Gittish Empire in Dragon Quest IX.

Goresby-Purrvis wears a dark blue cape with purple and orange sections. He wields a large, thin sword, which he often swings around when attacking and he has dark spots all over his face contributing to his uncanny appearance.

Goresby-Purrvis is a warrior through and through. He does not seem to have any goals or personal ambitions other then to fight strong opponents and serve the House of Gitt.

His loyalty lies in the House of Gitt itself, not the empire or its leaders. In fact, when revived again, he showed disdain for serving Corvus, and eagerness to fight the heroes. As to why he is loyal to the House of Gitt remains to be seen.

He uses the word "Purr" when he talks.

Goresby-Purrvis was originally part of the triumgorate before the collapse of the Gittish Empire, serving the House of Gitt. Though loyal to King Godwyn, he still considers the Hero/Heroine to be a worthy opponent. After Corvus was freed from his shackles and ascended to the Realm of the Almighty, Purrvis was revived alongside the Triumgorate to guard his new stronghold. Though he held no loyalty to Corvus, he was willing to battle the hero again.

Later, after the spirit of King Godfrey emerged from the Quarantomb, Gorseby-Purrvis' ghost returned to Gittingham Palace and asked the hero to put the former king's spirit to rest. After that, Purrvis presented a pallium regale and several alchemy recipes as a reward.

The hero battles Goresby-Purrvis twice in the main game, once in Gittingham Palace and again in the Realm of The Mighty. As well as this, much like the other triumgorate members, Gororesby-Purrvis has a grotto-boss that looks almost exactly like him, in this case Excalipurr.

Goresby-Purrvis is not an easy boss at first and he is harder than the other lieutenants, but with some leveling up before taking him on, Purrvis becomes an easy boss and his skills have much less of an effect on the party. 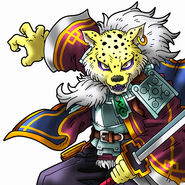 Goresby-Purrvis, as seen in Dragon Quest of the Stars
Add a photo to this gallery

Retrieved from "https://dragonquest.fandom.com/wiki/Goresby-Purrvis?oldid=186918"
Community content is available under CC-BY-SA unless otherwise noted.