The Gortress is a fortress located in the Gittish Empire in Dragon Quest IX. It is where the empire keeps various prisoners it has captured. It was created by someone, a bird or a dragon, called "Stellestria".

The story opens with the Hero/Heroine (Dragon Quest IX) next to a Gittish soldier. In front of Goreham-Hogg, he says that the hero is the person who Hootingham-Gore's forces are saying is causing trouble. The faithful Lieutenant then says to throw them in the dungeons. The Hero is forced in and told to get rest while he/she can.

Later, a soldier comes to wake the Hero and get him to work. When they go to the bridge, on the end they see a big man. He introduces himself as Sterling and offers to give the Hero a tour. Sterling walks to the shield field with the Hero and he warns them not to go past. It's explained that the...special people (Celestrians) are kept there. He says they'll get a painful shock if they touch it. He tells the Hero to see for themselves. He's surprised when - because of Greygnarl's Gittish Seal - they go straight through it.

He then shows the Hero the gallows (where prisoners are hung), and says they put the people who skive off from work here. Then they are shown the graves and introduced to Digby, who digs the graves for all those who die in the Gortress. Then the Hero is taken to the entrance of the Gortress, where they see they aren't allowed to go in. Finally, they're taken to the main labour area, where people are spinning a wheel (One person asks "What does this even do?", however the Gittish soldier replies that it's mandatory work for the empire, although he doesn't know either). Sterling says that's the whole thing. The screen goes black and says, that after a hard day of work, the hero goes to the cells again.

In the morning, a person slacking from work yesterday is about to be killed. Sterling decides this is enough, and attacks the soldiers, and told the Hero to turn the shield fields off, so the Hero goes to the watch tower, battles a Lethal armour and closes it. They turn it off and get out. They go to the other entrance with Sterling, while the other people battle. the hero and Sterling go to free the "special prisoners", which Sterling reveals are Celestrians.

They go to Goreham-Hogg's lair, where there are 2 treasure chests, the lieutenant and two soldiers. Sterling tells the Hero to take care of Hogg, and he'll defeat the soldiers. When they defeat him, the Hero and Sterling open the chests, and find the Ultimate Key and a whistle. The hero uses the key to free the Celestrians and exit the watch tower. The people are still there, supposedly waiting for their leader (They really just needed guidance).

After this, Barbarus shows up and attacks, and everyone flees. Just then, the Starflight Express comes and hits Barbarus, knocking him away, causing the Dark Dragon to flee. The Hero and Sterling go to it, and Stella is there, saying she's been looking all over the Protectorate for the Hero and Sterling. Sterling reveals his true identity. He's the captain of the Starflight Express. He takes the Hero back to the Observatory, ending the story of the Gortress.

There is a blue spot in Gortress Watch Tower that restores the party for free but is only accessible after the Shield Field is turned off.

Note: The priest will leave after Goreham-Hogg was defeated.

The Hero/Heroine cannot zoom away from here.

Note: This restriction will lapse after the shield field generator is switched off. 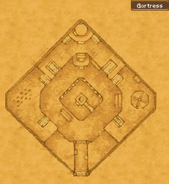 Basement
Add a photo to this gallery

The Gortress itself appears as a skill that Goreham-Hogg can use in his boss fight. When summoned, it appears in the center of the battlefield, and can summon 3 Dead residents or 3 Heavy hoods.

Retrieved from "https://dragonquest.fandom.com/wiki/Gortress?oldid=171540"
Community content is available under CC-BY-SA unless otherwise noted.