Gracos differs from a Merman by means of his greater girth, thicker lips, wristbands and weapon: a pole-arm with a crescent-shaped blade on the end.

Gracos is a brute and sometimes not very bright. This is seen in his first appearance, sleeping on the job and unintentionally informing the party of his master's plans at the slightest inquiry.

Gracos marks his first appearance as one of the 4 Dread Fiends that terrorizes the world, challenging the rule of King Poseidon for the underwater kingdom. While Gracos calls himself a demon, given his later appearances in the series it is doubtful he is one, and instead simply was given free reign to rule over the seas by The Archfiend. This great evil placed a seal upon Gracos that binds his life to the magical city of Sorceria, as the city knows the powerful spell Magic Burst, which could apparently defeat The Archfiend. Gracos is eventually defeated and the seal on the city is lifted.

Making his second appearance as a boss, Gracos is the one responsible for flooding Wetlock in the past and must be confronted in order to set things right. When encountered, he summons the spirits of several humans he drowned in order to turn them into Sunken spirits to fight for him. After the party defeats them, Gracos fights the party himself.

Gracos has a descendant that can be seen upon going into the future later in the game, Gracos V, whom has grown to hate humans for killing his ancestor. It is possible that the Gracos from this game and the Dread Fiend from Dragon Quest VI are also related, and more descendants would also help to explain all of the various recolors of Gracos running around as generic enemies.

Battle Strategy Gracos is a tough fight. He can attack twice in one round and hit the party very hard. He is immune to Sap and has a high resistance to Surround. Finally, he has a very high resistance to ice spells and skills so these should be avoided completely.

There is a small grace as Jann joins this fight. Even still, Gracos shouldn't be taken lightly. The Insulatle technique does wonders for this battle as well as Buff and Kabuff. Armor that protects against ice is a must. The Martial Artist's Wind Sickles should be used regularly as well as the Shepherd's Lambpede attack and the Hybrid skill Sword Dance.

Do not rely on Jann to heal the party. If you are in need of healing, have Maribel use the Staff of salvation.

Appearing as a rank A member of the Demon family, Gracos also has a small role in the piracy side-quest of the game, being summoned as one of the many monsters the player must confront while tracking down Captain Crow. One possible synthesis for a Gracos is combining a Merman with an Archdemon. 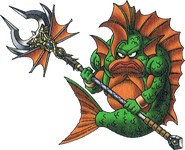 Dragon Quest VII - a possible capture error has the shaft and end of his weapon in the corner. 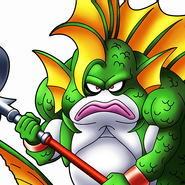 Gracos, as seen in Dragon Quest of the Stars