The green dragon is an enemy in the Dragon Quest series. Introduced in the original game, they are powerful, scaly beasts of legendary status.

In appearance, green dragons are quadrupedal and wingless, their underbellies an orange-brown shade. Like dragons in most other tales, green dragons are powerful, boasting impressive stamina, strength, and resilience, as well as the ability to breath fire.

While this monster can be found in the overworld, a specific one is guarding Princess Gwaelin in the Quagmire Cave, and must be fought to rescue her. This green dragon was no different from it's brethren originally, but was given a full boss promotion in the remakes.

The Green dragon is a rank D monster in the dragon family that can be synthesized with an Imp and a Jargon, although other combinations exist. There is also a Green dragon that appears as a miniboss in the dungeon on Palaish Isle.

The green dragon is a Rank D monster in Dragon Quest Monsters: Joker 2. One can be scouted or synthesized by mixing a boreal serpent and a skipper. 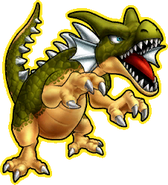 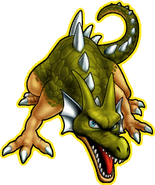 Green dragon's fourth artwork for MBRV.
Add a photo to this gallery

Retrieved from "https://dragonquest.fandom.com/wiki/Green_dragon?oldid=210375"
Community content is available under CC-BY-SA unless otherwise noted.