VII
Grody Gumpdrops is a boss monster in the game Dragon Quest VII.

Grody Gumpdrops is a green, overweight humanoid similar to a genie that constantly levitates. He has a long, unusual antenna-like structure which hangs from the top of his head and three fingers on his arms. His amorphous head has three earholes on each side and his eyes have small black pupils and are sunken. Gumpdrops is dressed somewhat like a stereotypical stage magician, wearing an extravagant dark green and yellow bodysuit with a red cape attached and a white cravat in his collar. He is capable of casting fire magic in battle, as well as utilizing light, both to blind his enemies and attack by creating a spectral sword out of his hand.

At some point prior to the events in Greenthumb Gardens, Grody Gumpdrops spread the rumor that the Grody Grotto was filled with rare treasures. It was actually a ploy to get unsuspecting adventurers to the cave and kill them. The party heads there and eventually comes across him and a pair of Goodybags, where he reveals his plan to the party before challenging them to battle. What Gumpdrops didn't expect is that the party are seasoned adventurers who are able to defeat him and claim the treasure he's been hoarding up in the cave.

Grody Gumpdrop's physical attack does ~25 damage. Sizz and Sizzle hurt the party for ~20 and ~40 HP respectively. In addition, he can use Dazzleflash, which reduces the party's accuracy. Sometimes he will attack twice in one turn.

If the Hero and Ruff have edged boomerangs, it makes the battle easier. They should regularly attack because their first attack will hit Grody Gumpdrops first and then the goodybags for successive damage. Kiefer should use a combination of Focus Strength and Flame Slash. Maribel should cast Sap on the Grody Gumpdrops twice.

The player is advised to take out Grody Gumpdrops first as his attacks are more devastating. When he is defeated, the goodybags become much simpler.

The creature's former name is likely a contraction of "cave monster", but may also have been a play on "caveman", the latter describing humans and their relatives in prehistory. Its current name is a pun mashing "grody" (meaning: disgusting, gross) with "goody gumdrops", a seldom-used expression of delight. 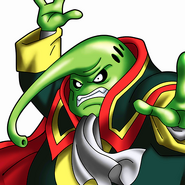 Grody Gumpdrops, as seen in Dragon Quest of the Stars
Add a photo to this gallery

Retrieved from "https://dragonquest.fandom.com/wiki/Grody_Gumpdrops?oldid=188864"
Community content is available under CC-BY-SA unless otherwise noted.