"If that is so, then there will be no forgiveness! You will soon realize your stupidity!"
— Hargon

Hargon is the primary antagonist of Dragon Quest II and a recurring character in the Dragon Quest series. He is a corrupt cleric that plans to summon Malroth, a god of destruction.

Hargon is a blue skinned humanoid being who wields a crystal-ball-topped staff in his right hand. On his head he wears a finned helmet bearing a circular gem at the forehead, around his neck a necklace with a crystal adornment, and has a shroud draped over his body that prominently shows off a stylized bat - the symbol of his order. He also has sandals. In several ways, he, at a glance, resembles The Dragonlord, as they are both blue-skinned humanoids who carry staves, but whereas the Dragonlord more closely resembles a sorcerer, Hargon's outfit clearly shows his religious origins.

Hargon is a bit of an unusual case as far as Dragon Quest villains go; he is not quite as fleshed-out as the Dragonlord or Zoma, yet he manages to nonetheless be an intimidating villain in his own right and with a distinctive personality, being the devoted head cleric of Malroth's faith in Alefgard (The Children of Hargon). Hargon is justifiably hated by the public (for good reason) and the kingdoms of the land and heroes both oppose and hunt his minions. Despite this, Hargon rose among his fellows to lead by example and spread Malroth's will across the land.

Hargon's faith in his patron is absolute, and serves as a dark mirror of the heroes' strength of will. Even when interrupted in his fortress he chastises the heroes for interrupting his prayer session.

Hargon is much more proactive than the other early Dragon Quest villains. He is motivated by unswerving faith and righteous anger, and is willing and able to smite any that defy his faith. He does his patron's bidding by spreading pain and suffering across the land and weakening the ability of humanity to resist. He takes special pride in trying to strike terror in the hearts of the populace, which he succeeds at to the point where the King of Tantegel goes into hiding and the Kingdom of Moonbrooke is completely destroyed.

Hargon's overarching goal is to establish his dark faith in a region otherwise dominated by the forces of light. He leads a legion of loyal worshippers and monsters to terrorize the countryside. His goals are always pushed towards angling humanity towards despair, and, in turn, driving them towards the worship of Malroth in order to save themselves.

In spite of his faith, Hargon, fittingly for an archvillain, is vain, arrogant, and cruel. He possesses extremely powerful magic, and can invoke powerful curses on those who defy him - even the heroes are not immune, and Hargon nearly succeeds at killing the Prince of Cannock in this fashion.

He can conduct plans even in death handed to him by the Scions of Erdrick, as shown in Dragon Quest Builders 2, where his master lost his memory and became an amnesic human. Hargon takes a role similar to Rubiss being the voice in Malroth's head and telling him to kill humans and destroy everything. When his illusion of the Isle of Awakening is about to disappear, he sadistically welcomes it, implying he is a death seeker. He also hopes it destroys the Scions of Erdrick for killing him, Malroth, and his army, showing his vengeful side. Despite these qualities, however, he still shows concern for his own monsters as seen when Malroth kills 2 Whackolytes beneath Krumbul-Don and Hargon tells him they worshipped him, and should feel ashamed for this sin.

Hargon is established as the big villain at the start of the game, his minions attacking the kingdom of Moonbrooke and leaving only one soldier to struggle to Midenhall to deliver news of the attack before perishing from the hardships endured. The Princess of Moonbrooke, one of the descendants of Erdrick, manages to survive the assault but is cursed by Hargon into the form of a dog. The Prince of Lorasia is sent out to stop Hargon, and he later gains the support of the Prince of Cannock and Princess of Moonbrooke (the latter after freeing her from her curse).

Hargon is later defeated by the heroes in his castle, which sits on the plateau of Rendarak. In his last breath, Hargon offers himself to Malroth as a sacrifice and dies. This act of defiance allows Malroth to come forth into the world, triggering the final boss battle.

While not an obtainable monster in the game nor one that is even seen, Hargon is mentioned in the library entry for Atlas.

Hargon can be synthesized by combining a dhuran with a dierantula. He is a powerful Rank S monster.

Hargon is an antagonist and is encountered towards the end of the game. He is never actually directly fought by the player, however, and only appears in cutscenes.

The entire world that the Builder and Malroth explore is actually an illusion created by Hargon. Hargon is surprised it still exists after his death, but decides to use it to his advantage and attempt to revive Malroth once again. Using unclear methods, he draws Malroth and the Builder into the illusion; his intent is to use the illusory world as a sort of incubator with the Builder to restore Malroth's power.

Hargon's soul resides within Malroth, remaining from when he offered himself as a sacrifice in his original attempt to revive the Master of Destruction. It is due to his intertwining with Malroth's being that he is able to speak to Malroth in his head. Hargon patiently waits for Malroth's power to swell as the Builder continues creating things on the islands. Hargon does not reveal himself until Malroth's rapid power growth causes him to lose control of himself.

With Malroth's human guise incapacitated, Hargon spirits him away to coax him into shedding his human form that he has, in Hargon's opinion, grown too attached to. Hargon's methods here involve plunging Malroth into another illusion; in it, Hargon offers Malroth's new friends, Lulu, Rosie, the other island residents, and the Builder, as sacrifices disguised as Skeletons Skeleton soldiers & himself, which Malroth unwittingly accepts. Malroth, upon realizing what he has done, does not know how to cope with this and begins to resume his true form and suppress his memories from his time with the Builder. Hargon is pleased with these results and watches as Malroth destroys Malhalla from his castle. Despite the progressing destruction of the realm Hargon retreated to, the Builder is able to arrive at Hargon's castle and confront Hargon and Malroth. The builder defeats a stunted Malroth, which ends up working out in Hagon's favor; it allows Malroth's human memories to finally be shed, resulting two separate Malroths: one being the weak discarded shedding of his human memories and the other being the rest of him. Hargon and the Master of Destruction then leave the castle as it is destroyed, leaving the Builder and the vestige of the Master of Destruction for dead. The Master of Destruction and Hargon are both proven wrong, however, as they are chased down by the Builder and Malroth. While Hargon does not directly participate in the ensuing battle, he ends up being killed by the humanoid Malroth. 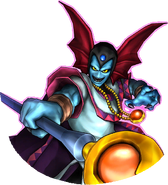 Hargon's artwork for MBRV.
Add a photo to this gallery

Retrieved from "https://dragonquest.fandom.com/wiki/Hargon?oldid=183002"
Community content is available under CC-BY-SA unless otherwise noted.