The Hero/Heroine in Dragon Quest IV is an 18-year-old man or woman prophesied to defeat Psaro and save the world from the rising tide of Demons. As the only people able to wear the Zenithia Equipment, they are the only person in the world capable of doing this. To stop this from happening, Psaro and his minions attempt to eliminate the Hero before they can take up arms..

Uncommon in the Dragon Quest series, IV allows the player to choose their character's gender as well as their name (similar to III and IX). The Hero's name is up to the player, a Dragon Quest staple, but the default names are Solo for the male and Sofia for the female.

The Hero wears a green tunic with a white shirt and white pants, adorned with a belt with a blue gem. His Zenithian Helm is decorated with a blue gem in the center and two wings which appear to be dragon like in design. He carries the scabbard of the Zenithian Sword on his waist behind his back and his shield strapped on his right shoulder. He has both his ears pierced with Slime Earrings on both of them. He has long flowing green hair that reaches his mid back. He has a medium build, being tall but not too muscular.

The Heroine wears what appears to be a leotard, which covers both her left arm and leg. She wears blue leg warmers covered by her boots. Like the Hero, she has long green hair, but hers is curly and appears to cover the wings on her Zenithian Helm (if it does have any at all.) She also has her ears pierced with Slime Earings and has bracelets on both her wrists. She carries the Zenithian Sword's scabbard on her right shoulder and weilds her shield on her left arm.

In the tradition of Dragon Quest games, the Hero/Heroine, are silent protagonists, their personalities are only stated by other characters around them and how they react towards their actions.

In the beginning, the Protagonists appear to be rather sheltered. They know nothing of the world outside their village as their upbringing must be kept a secret from Psaro at all costs.

After the massacre of their home village, they slowly begin the journey towards becoming a full hero and are taught by the people around them on the ways of the world. By the end of the game, they have become fully matured and accept the burden placed on them by being the Chosen Hero.

Bits and pieces of their personality are revealed by the people they meet on their travels. Oriefela states they seem very brave and wishes her child had grown up to become like the Protagonists, stating it would have made her very proud if the child had become as reliable and brave as they are.

From Eliza and Maya we learn they are quite naive, given the fact they are easily tricked by Eliza's shapeshifting and her teasing them for it and that they know next to nothing about gambling, which is Maya's favorite pastime. Alena reveals they love fighting and training, as such, the two of them get along very well.

As all Dragon Quest Protagonists, the Hero/Heroines are brave, loyal, reliable and won't shy away from their duties when the world is at stake, going far and wide to help those in need and refusing to let injustice go unpunished and evil run amok while they can do something about it.

On one starry night, a Zenithian fell from the sky castle of Zenithia. She subsequently fell in love with a human woodcutter and, together, they produced a half-human, half-Zenithian child - the Hero. Shortly after the child's birth, the Hero's father died when the Zenithian God ordered his execution by lightning and the Hero's mother was punished by returning to Zenithia, separated from her child. According to the Zenithian's law, it is forbidden for a human and a Zenithian to become a couple. The hero's father was buried next to the woodcutter's home where the Hero's grandfather lived.

The Hero was then brought up by two loving foster parents in a small village near the woodcutter's hut, to be protected by the denizens of the settlement until he came of age. He grows up alongside his childhood friend, Eliza and proceeds to train with a master swordsman regularly. However, the Hero's peaceful existence wasn't to last; eventually, Psaro's minions discovered the secretive village and assaulted it with the objective of assassinating the eighteen-year-old. They slaughtered all the villagers who stood in their way, including Eliza, who died whilst masquerading as the Hero with her transformation ability. Thinking that they had defeated the real Hero, the minions of Psaro left the ruins of the village. The Hero, after witnessing the savage ruins of their home, leaves to embrace their destiny as a hero.

During his travels, the Hero encounters the seven other 'Chosen' and they form a group to stop Psaro's evil plan to make use of the Secret of Evolution to destroy the world. The Hero and his companions go on a quest to retrieve all the pieces of the Zenithia equipment which they then use to gain access to Zenithia Castle. The Zenithian Helm is given by the king of Canalot, and the Zenithian Shield is given by the queen of Femiscyra.

After speaking with the Zenith Dragon, the Hero and the other chosen travel to Nadiria and battle Psaro and his minions, eventually defeating them. After dropping the rest of the chosen off at their respective homes, the Hero returns to their destroyed village and sees Eliza being resurrected as well as the village being restored to it's former glory. They kiss and hug then begin to walk towards the village entrance and are greeted by the other chosen.

Several centuries after their death, the Order of Zugzwang hunted down and wiped out descendants of the Hero due to the fear that a new Legendary Hero could destroy Grandmaster Nimzo.

By the time of Dragon Quest V, only three descendants of the original Legendary Hero remained. One of them would marry the Hero and give birth to the new Legendary Hero who would set out to vanquish Grandmaster Nimzo.

Long before their birth, the Hero appears on Reaper's Peak if "the near future" option is chosen for the town's residents. Both the male and female versions appear individually. The male version appears alongside Eliza and is too engrossed with her to speak with the player, and the female version explains the intricacies of the dreamsharing feature.

The Hero of Dragon Quest IV is an alternate costume for the DLC character, the Hero in Super Smash Bros. Ultimate.

The Hero has extremely high stats, especially in the HP and Strength areas.

The Hero is the only character capable of using lightning spells such as Zap. He/she was also able to learn the Morph spell at Level 30 in the NES Version. 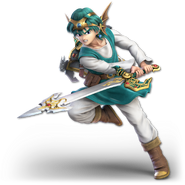 Render from Super Smash Bros. Ultimate
Add a photo to this gallery
Retrieved from "https://dragonquest.fandom.com/wiki/Hero/Heroine_(Dragon_Quest_IV)?oldid=169226"
Community content is available under CC-BY-SA unless otherwise noted.