Hero/Heroine is the hero/heroine character of Dragon Quest X. In the game, his/her sibling kidnapped in the tragic moment his/her home village, Tenton was attacked by monsters and demons.

Prior to their death, the Hero was a youth in their late teens who lived a quiet life with their family and fellow villagers. Their design carries a tropical flair owning to Tenton's nature as an island community.

The game begins with the player customizing the Hero and their younger brother and sister, followed by a brief tutorial segment that introduces the inhabitants of Tenton and the Hero's place in the close-nit community. This tranquil life comes to an abrupt and tragic end when a force of monsters led by Nelgel massacre the villagers in a full frontal assault. The Hero is able to save their siblings, but they themselves are quickly killed.

Awakening in a strange place known as the Room of Revival, the Hero is given a second chance at life by incarnating as one of the world's five civilized races: an Ogre, Elf, Dwarf, Poppet, or Wetling. Once restored to the land of the living in the territory of their new race, the Hero must adjust to their new body, reunite with their siblings, and avenge Tenton.

The Heroine and Hero appear in the Dragon Quest X world in the 3DS and Switch versions of the game. They request that the Revivalist be defeated so they don't have to be reborn as either a Lump mage, Kisser, Merman, Troll, or Grublin. Once the Luminary and the party defeat the Revivalist, they reward them.

Hero and Heroine artwork for X. 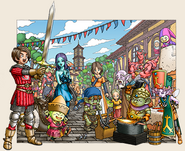 The Hero showing off his sword to townsfolk and tourists.
Add a photo to this gallery
Retrieved from "https://dragonquest.fandom.com/wiki/Hero/Heroine_(Dragon_Quest_X)?oldid=180395"
Community content is available under CC-BY-SA unless otherwise noted.