The Hero of Dragon Quest VI begins his journey awakening from a strange dream in the village of Weaver's Peak. He lives there with his sister Tania.

The Hero has many official names in Japanese. The default name for him in the games is Rek (レック). In the CD theater drama, his name is Will (ウィル). In the manga, his name is Botts (ボッツ). In the novelization, his name is Iza (イザ).

The Hero has spiky blue hair that gives him a striking resemblance to Gohan from Dragon Ball Z. He wears two gold earrings and has a gold band on his neck and right arm. He is also wearing brown fingerless gloves. The sheath of his sword is slung over his right shoulder. He has purple shorts underneath his orange tunic, over which he wears a green vest. His belt has a dragon insignia on the buckle. His lower legs are wrapped in white cloth. and his black boots have yellow tips.

The game begins in the middle of the Hero's then-unexplained quest to defeat the Dread Fiend Murdaw. He is accompanied by two companions, Carver and Milly. The trio, with the help of a small dragon summoned by Milly, reach the Dread Fiend's castle situated high above the mountains. When they confront their foe, however, Murdaw unexpectedly overcomes the party, banishing them to parts unknown.

The Hero wakes up from what appeared to be a dream and is greeted by an unknown girl, Tania, who claims to be his sister. The Hero, who is amnesiac at this point, is asked by the mayor of his supposed home village, Weaver's Peak, to go to the next town to sell goods in order to buy a crown for the village's upcoming ceremony. The Hero gladly accepts and begins the first step of his journey. When he returns to the village, the celebration begins. When Tania who is praying to the goddess becomes possessed the Hero is told by the spirit that he must venture out and defeat the demon king Murdaw and discover his true identity.

The Hero arrives at the kingdom of Somnia, a city that never sleeps (literally), where he enlists in the King's army alongside Carver, neither of whom are able to recognize one another. The recruits are instructed by Captain Blade to retrieve the Restless Heart from Guardsbane Tower as a symbol of a warrior's strength. While all the other recruits cop out, either the Hero or Carver will retrieve the Heart (the victor depends on whether the Hero is successful in defeating Garrett or not; the outcome will not change). The two become travelling companions regardless of the victor and, during their travels, come across moments where they are not visible to the eyes of everyone else. They eventually meet up with Milly at Port Haven, who is able to see them. She introduces the duo to her master, Madame Luca Luminista, who uses Dream dew to make the two visible. Milly joins the party at this point.

The three continue the journey, during which it becomes evident that there are two distinct worlds, the Real World and the Dream World, both of which are being terrorized by the same being. During their travels in the Real World, they encounter Ashlynn, a mysterious girl who is similarly invisible to her surroundings until the Hero uses the Dream dew on her. Ashlynn joins the Hero at this point as well. Later on, the party subdues a ravaging horse, Peggy Sue.

The Hero and his companions reach another version of Somnia in the Real World, where, much to his confusion, he is mistaken to be the King's son. The Hero takes advantage of this confusion to enter the otherwise-inaccessible castle wearing a Noble garb, but is eventually caught and kicked out, though not before finding out that this King Somnus is in a state of never-ending sleep.

The Hero and the party journey to the newly-accessible lands that lead to Murdaw's lair, during which they meet a new companion, Nevan, as well as a new ship. The party journey to Murdaw's Keep, where they encounter the real Murdaw. The same events from the beginning of the game unfold once again, and the Hero is once again thrust into the Dream World's Weaver's Peak. However, he breaks through the deception this time using the Mirror of Ra and is returned to Murdaw's Keep, where the party finally engages the Dread Fiend in battle. Murdaw is finally defeated, and the party returns to Somnia. The Hero is given the Lightning staff as a reward.

The Hero sets off on another journey to find his "real" self. During his travels, it becomes clear that Murdaw was not the only threat and there are other Dread Fiends terrorizing both worlds. The party also learns of and collects a set of Legendary equipment that only the Hero can equip. Eventually, the Hero finds Weaver's Peak of the Real World, where he finds the village to be under attack by monsters. He and the party fight their way into Tania's home, where they find the Real World version of the Hero battling the leader of the monsters, a Demon-at-arms. The Hero and his other self merge into one, resulting in the Hero to regain all his lost memories and learn a new spell, Zap (this can happen before or after defeating the Demon-at-Arms; other than the difficulty of the boss battle, the outcome will not be any different). Upon the fusion, the Hero will learn his true identity, which is indeed that he is the Prince of Somnia, who disappeared shortly before the start of the game in a quest to defeat Murdaw.

After collecting the full set of the Legendary equipment, the Hero comes across the Shrine of Legend, where he summons a corrupted castle that must be defeated in battle. The castle will turn out to be Cloudsgate Citadel, which is currently occupied by Dhuran, the last of the four Dread Fields terrorizing the two worlds. Upon defeat, Dhuran reveals that he and the other Dread Fiends are minions of the Archfiend Mortamor, the true main antagonist. Upon his defeat, the party gains a new member, Terry, a swordsman whom they encountered frequently on their journey and who happens to be Milly's long-lost brother.

The Hero is able to gain access to the Dread Realm, the dark world where Mortamor resides, upon unlocking Peggy Sue's real powers at the Pillar of Pegasus. The now fully-formed party journey to the depths of the realm, where with the aid of Supreme Sages Benjamin and Isaac, gain access to Mortamor's Dreadlair. The Hero and his companions engage the Demon Lord in combat, where they win and vanquish the source of the worlds' evils once and for all.

The Hero and his companions return to the upper worlds, where they find out that due to Mortamor's death, the Dream World will no longer exist. To his horror, this would mean that Ashlynn would cease to exist as well since she does not have a Real World counterpart like the rest of the party. The Hero parts ways with his companions and returns to his kingdom, where he prepares to resume his role as the Prince of Somnia. Sometime afterwards, the Hero joins Milly, Carver, Nevan, and Terry in Madame Luca's house, where they witness through Milly's crystal ball not only the start of a new era, but that Ashlynn is alive and well, residing in the castle that will soon come to be called Zenithia.

Like all party members in Dragon Quest VI, the Hero is capable of taking up any Vocation after Alltrades Abbey is restored. Unlike other party members, the Hero only needs to master 1 Advanced Vocation (excluding Armamentalist and Paladin) to take up the Hero Class.

He also learns several unique abilities regardless of class:

He also learns several spells regardless of class:

Hero's artwork for the original VI. 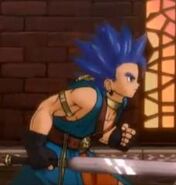 Hero preparing to battle in MBRV.
Add a photo to this gallery
Retrieved from "https://dragonquest.fandom.com/wiki/Hero_(Dragon_Quest_VI)?oldid=186477"
Community content is available under CC-BY-SA unless otherwise noted.