The Hero in Dragon Quest VIII is an 18 year old, low-ranking royal guardsman in Castle Trodain. He was one of the small band who survived Dhoulmagus' deadly attack, along with his current traveling companions Trode, Medea and Munchie, the faithful mouse who lives in the Hero's bag. After defeating Dhoulmagus, the Hero continued to seek a way to lift the curse on Trode, Medea and Castle Trodain.

The Hero is a versatile character, as equally proficient in armed combat as he is in using healing spells and support magic. His preferred weapons are swords, spears and boomerangs.

The Hero of Dragon Quest VIII has long green boots, and green pants. He has a blue shirt, and a orange jacket, bearing a striking resemblance to Goku and Gohan from the Dragon Ball series. He has a belt, and a green bag, which his pet mouse sleeps in, and where he stores all of his items. He has a sheath on his back, brown hair and black eyes and a red bandanna on the top of his head.

Like all Dragon Quest heroes, the Hero is perpetually silent throughout the game. However, he is pure-hearted, and will help anyone in need of help.

The Hero is chivalrous, stoic, abstemious, demurring, humble, courageous, indefatigable, and strong. In contrast to heroes of other games, this Hero dresses very casually, a consequence of his lowborn upbringing as opposed to being royalty or some kind of chosen one. Hero's greatness is gained through moral uprightness, rather than through divine birthright.

He also does not appear to wear any kind of armour (irrespective of whatever he may actually have equipped). His red bandanna has become one of his iconic features. Dragon Quest VIII has a character's in-game appearance change based on their weapon and shield, a first for the series.

After the defeat of Rhapthorne, the Hero will be promoted as the head guard in castle Trodain. He will be assigned the task to accompany princess Medea to Savella Cathedral for her wedding to prince Charmles. Depending on whether the Argon Ring is in possession, the ending differs. The ring may be attained in the Hero's side quest.

This side quest reveals the Hero's origin story in the Dragovian Sanctuary. After defeating the Lord of the Dragovians, Chen Mui will admit to being the Hero's maternal grandfather. The Hero is actually the union of a human and Dragovian, the father being Eltrio, the missing prince from the Kingdom of Argonia and the mother being Chen Mui's daughter, Xia.

When the Hero came of age, the Dragovian Elders decided to exile him from the sanctuary with his memories sealed off. This seal takes on the form of a curse which displaces other curses making the Hero less susceptible to curses compare to others. Unwilling to let his grand child live alone in the human world, Chen Mui agreed to take the form of a mouse to accompany him.

Once Chen Mui gives the Hero the Argon Ring, the alternate ending will be unlocked. Instead of helping Medea run away, king Clavius permits the Hero to replace Charmles in fulfilling the royal marriage with Medea.

Curse Resistance - The Hero has a natural immunity to curses.

Munchie's Breath - The Hero is the only party member that may feed cheese to Munchie in battle to use Munchie's Breath. Using any cheese as an item takes regular priority to execute and may only be used twice per battle.

Call Team - After clearing Rank E in the Monster Arena, Morrie will reward the Hero with the ability to call his monster team in the battlefield. This ability costs 10 MP and will always be executed first in the following round. However, each monster team may only be called once per battle.

Swords pay off if you are in pursuit of metal monsters, with Metal Slash (30 points) being particularly useful. If you accumulate 100 points in swords and courage you learn the almighty Gigagash, although this takes quite some time to achieve. The Hero is allowed to use a variety of different swords throughout the game. Swords are very good in situations against bosses. They become even more useful when you learn Falcon Slash (52 Points) which makes you attack twice for 0 mp. With the use of that skill and a sword called the Uber Falcon Blade It is possible to hit 4 strikes in one turn of the Hero attacking.

Note: It is highly recommended to never reach 100 in Any skill because it takes too many points that can be applied in a different skill set.

Spears are ideal for hunters of metal monsters in particular, with Thunder Thrust (12 points) and Lightning Thrust (59 points). The Multithrust (25 points) is also worth a try against single enemies. Spears are extremely useful in the beginning of the game so most players prioritize as such. This is commonly used if Yangus uses Scythes.

Boomerangs are a real boon in the beginning of the game because they attack all enemies. It is highly recommended to get boomerangs to 52 points in order to get superthrow which allows the Hero to hit everyone for 150% damage with no damage decline.

Fisticuffs is largely ineffectual to the other skills, although some actions are worth a try like Thin Air (42 points). The Hero can only make a real impression when he learns Attack + 50 (100 points). It is recommended that Jessica and/or Yangus learn fisticuffs for Thin Air making it obsolete for the Hero.

Courage is extremely useful as a means of learning traits that reduce MP consumption (at 56 and 90 points). Don't ignore the advanced attacks either (Zap, 48 points and Kazap at 100 points), or the Omniheal spell at 82 points.

The Hero (referred to as "Eight" by Super Smash Bros. creator Masahiro Sakurai) appears as a costume for the Hero, along with the Heroes of Dragon Quests XI, III, and IV. He wields the Dragovian king sword and Dragovian shield. As a palette-swap of the Hero character, and for gameplay-balance reasons, Eight does not retain his curse immunity in Smash.

In Classic Mode, this costume appears as the main opponent for Stage 5 when playing as the Hero. He is fought on the Battlefield form of Gaur Plains (from Xenoblade Chronicles) alongside a tiny Pikachu, referencing Munchie.

The hero scoping out the world map. 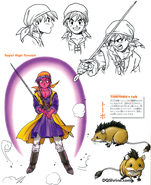 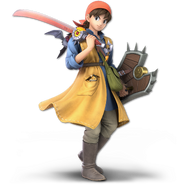 Render from Super Smash Bros. Ultimate
Add a photo to this gallery
Retrieved from "https://dragonquest.fandom.com/wiki/Hero_(Dragon_Quest_VIII)?oldid=206630"
Community content is available under CC-BY-SA unless otherwise noted.