Hootingham-Gore is one of the lieutenants of the Gittish Empire in Dragon Quest IX and the lead strategist, specializing in manipulation above all else. According to his description information, he was actually the one who revived Barbarus, not Corvus.

He is the first of the Triumgorate to be encountered, but the second to be fought. After Goreham-Hogg is defeated and the barrier broken, Hootingham-Gore will finally engage the party in a battle. As with the other Triumgorate members and all of the Gittish Empire, he was killed by Greygnarl three hundred years ago but was revived by Corvus to do his bidding. After being resurrected, he became part owl, possibly to show his intelligence.

When revived along with the rest of the Gittish Empire, Hootingham becomes more intelligent, often saying words with an owl twist to it. He does not have a tolerance for failure, as seen when kills the Gittish captain in Upover. When revived again by Corvus, Hootingham-Gore plots to usurp him and his armies after defeating the Hero, although he acknowledges that Corvus fell from grace and was genuinely surprised that a Celestrian would revive the Gittish Empire, despite them hunting down Celestrains 300 years ago and the present day.

Hootingham-Gore appears briefly during the events in Upover, killing a Gittish captain who failed to stop the Hero protecting Greygnarl. After these events, Hootingham-Gore is found guarding the entrance to Gittingham Palace. It is here he finally challenges the party to a battle. He fights alongside two Bad karmours who have a tendency to guard him, preventing him from taking damage. After he is defeated, the entrance to Gittingham Palace opens up, and the way forward is revealed, though he warns the Hero about the last of the Triumgorate.

In the Realm of the Mighty, Hootingham-Gore is once again brought back to life to hinder the party, as are the rest of the Triumgorate. He challenges the party to a battle, saying that he does not trust Corvus and will dethrone him once he defeats the party. However, he never gets the chance to try, as he is defeated once again and Corvus doesn't bring him back a third time. This marks his final appearance.

Though Hootingham-Gore has low HP, the two Bad Karmours that accompany him can make the fight hard. Take them out first, as they can use Helm Splitter to lower your defence, and sometimes protect Hootingham-Gore from attacks.

Once they are gone, Hootingham-Gore is fairly easy. He can use the Fuddle (inflicts confusion) and Divine Intervention (lowers resistance to magic) spells, which rarely work, and the fairly weak Frizzle and Swoosh spells. He can also cast Bounce on himself, so focus on using physical attacks while keeping healed, and he will fall easily enough.

Amusingly, if all of your characters are under the effects of Bounce or Magic Mirror, then Hootingham-Gore will start using physical attacks, which do negligible damage, especially when Buffed.

Hootingham-Gore in the Gittingham Palace entrance in the Japanese version of IX.

Hootingham-Gore on Barbarus in the Japanese version of IX. 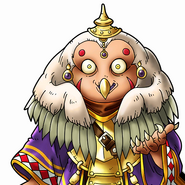 Hootingham-Gore, as seen in Dragon Quest of the Stars
Add a photo to this gallery

Retrieved from "https://dragonquest.fandom.com/wiki/Hootingham-Gore?oldid=186635"
Community content is available under CC-BY-SA unless otherwise noted.