Indignus is fiercely loyal to Mordegon, guarding the door to the Fortress of Fear. He has some respect for the Luminary, showing his admiration with human achievements and praised Erik for escaping the Rock of Wrong.

When the Luminary and his allies make their way to the Fortress of Fear, a giant blade comes out of nowhere, thus marking Indignus' entrance. He commends the Luminary for defeating four of the other Spectral Sentinels, and making it this far, but vows to kill him and his friends so Mordegon can keep Erdrea under his rule. After a fight to the death, Indignus dies and tries to warn the Luminary that time is what it is and must not be changed. With that, he disappears, relinquishing the Blue Orb and allowing the party access to the Fortress of Fear. His role in the Definitive Edition is the same, expect he was the one to destroy the Watcher's homeland, not his master, and locked up Erik in the Rock of Wrong. When Erik escapes with help from a Healslime named Healijah, he sends some Dragon riders, Skelegons, Liege lizards, and Chihuawyrms and Ethereal serpents gone Vicious to attack him, stating that he doesn't want an accomplice of the Luminary to remain at large. Erik fights them off, but gets tired. However, Healijah gives him a power that can be used once at the cost of his memories, which Erik accepts. Indigus, thinking one of Mordegon's notorious enemies has accepted his fate at last orders the monsters to seize him, but Erik's power goes up sky-high and fights the monsters off efficiently and deadly at once, causing the Spectral Sentinel to take matters into his own hands. The two fight with Erik emerging victorious and breaking Indignus's armour. However, just as he is about to lay the finishing blow, the memory loss effect kicks in, causing the Spectral Sentinel to send Erik flying. 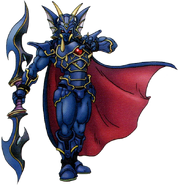 Indignus in his Dragon Armour
Add a photo to this gallery

Retrieved from "https://dragonquest.fandom.com/wiki/Indignus?oldid=173710"
Community content is available under CC-BY-SA unless otherwise noted.