Start a Wiki
watch 04:00
'Dragon Quest 11' Beginners Guide: Jade
Do you like this video?

Jade is a character in Dragon Quest XI. As a martial artist, she fights with her bare hands, claws, and spears, while also being highly geared towards charming the enemy with her sex appeal.

Jade is a tall and physically fit woman with purple eyes and long, jet-black hair tied with a red hairband in a ponytail that goes past her back and a fringe parted to the right side of her face. She wears a jade green-coloured halter top attached to a choker with a metal ring over a black tank top and a jade green leather wrap over a pair of black short shorts. On her hands, she wears jade green bracers and black fingerless gloves, and she also wears a pair of jade green high-heeled boots that reach up to her knee. She is often seen carrying a glaive resembling a cross between a Japanese naginata and a Chinese guandao.

Jade is fearless and brave. Her flashing kicks are said to be unmatched in terms of power. Her elegant beauty and dignified personality indicate that she may be more than just a skilled warrior. She deems herself the protector of the Hero, much like an older sister, but has a vulnerable side as well.

Jade was born to King Carnelian and his wife more than 16 years prior to the start of the game. She was presented shortly after her birth to friends and rivals Hendrik and Jasper by her doting father, who presumably lavished upon her as his only heir to the throne. However, some time before the age of six, the Queen passed away, and Carnelian raised her with his court. She soon developed a rapport with other monarchs of the world as they met for the Colloquy of Kings, and in particular took a liking to the Drasilian royal family, taking them as her own when she visited.

Several nights after the Luminary was born, and after the Colloquy convened, Dundrasil came under attack from an army of monsters. King Irwin of Dundrasil ordered Jade, his wife Eleanor, and the babe evacuated to safety while he and the other kings of Erdrea fought to push back the fiends. While successful against the first waves, Irwin was soon stonewalled by two moosifers and a barbatos, and directed the women through a bunker in the dungeons of the castle. They escaped into the field, but Eleanor was killed while distracting two headless horsemen. Jade was struck by a third, losing the child and dropping him on a nearby river, where he floated with the currents. Believing the Luminary dead, and motivated by her self-hatred, Jade later went into exile along with Lord Robert and travelled the world with him, eventually training together as martial artists.

Jade and Rab enter as contestants in a Masked Martial Arts tournament held in Octagonia when the two learn that the Rainbough is a potential prize. Jade's skill alone is more than enough to advance the pair into the final brackets, where they face off with the Luminary and partner Vince Vanquish, a reigning MMA champion. On the eve of the award presentation, Jade goes missing along with several other combatants, including Vince. Rab joins the Luminary in search of her.

As Vince disappeared at the orphanage he runs, the party looks there for clues. One of the kids saw Vince vanish in the basement. There, they find a secret passage leading to an underground cavern covered in spider webs. As they approach a chamber deep within the cave, Vince is heard negotiating with Arachtagon, who has been draining the energy of captured fighters to create a serum used by Vince to make himself the top fighter year-over-year. Arachtagon was using him to tenderise his prey before killing them, and Vince breaks off the pact when he learns this. But the spider has already injected Vince with his venom and begins to drain his strength as well. The party then engages Arachtagon in battle; and he is defeated. With this done, they free the trapped fighters and take them to recover for the night.

As Vince and the Luminary stage a tiebreaker MMA bout, Jade and Rab leave Octagonia with their winnings as well as the Rainbough, heading for Dundrasil. The party follows behind. Once they arrive, Rab enlightens the Luminary on the events of sixteen years ago, and leads him to Queen Eleanor's grave as he again pays his respects. Jade has already proceeded to an altar beyond the castle ruins, where she waits for Rab. Rab invites his grandson to help perform a rite to send the souls of the fallen back to Yggdrasil, which our hero agrees to do.

On the night of the ritual, Hendrik arrives with a battalion of soldiers, believing he has finally caught up to his target. With the Luminary nearly pinned, Jade intervenes to push Hendrik back. She and the Luminary spar with him and, just as the Luminary is again pinned, she dives to shield him; but both must jump to the adjacent river. Jade is able to break their fall, never letting go of her surrogate brother as she did all those years prior. The pair end up in a secluded cabin to the south of the ruins, resting there until the morrow.

Hendrik picks up his pursuit once more, but Jade triggers his memory, distracting him long enough to drop-kick him off of his horse so that she and the Luminary can break away and back to the ruins, where the rest of the party waits.

Back in Dundrasil, the Rainbough shows the gang of seven where they must travel next. Rab follows with an explanation of Mordegon's grand scheme. Handing the branch off to the Luminary, Jade and Rab agree to join his cause as the family sworn to protect him.

As she scours the devastated Erdrea after the Fall of Yggdrasil for clues to Mordegon’s defeat, Jade returns to Octagonia, but is soon enthralled by the Spectral Sentinel Booga when he transforms the fighting mecca into a captivating casino and its residents into monsters. She becomes Booga's personal callgirl and takes on a number of demonic traits as a result of his handiwork.

Having liberated the ruins of Dundrasil from their sixteen-year curse, the Luminary and his party travel to Octagonia next, taken aback by the appearance of monsters and the general tackiness of the city. Witnesses saw Jade come through, so the four press further for clues as to her whereabouts. They meet a drackmage in the converted arena who demands a love potion to allow entry into the VIP suite and, after winning a few tokens any way they can, the party make their offering and prepare to have an audience with someone in charge. A jinxed Jade appears before them. Though Rab and Hendrik attempt to snap her out of it, she refuses and attacks. Jade is knocked out, much to Booga's displeasure and anger. He charges at them, but is also put down. His spell weakened, Jade returns to sense and remembers her mission. Her new succubus powers manifest in her rage towards Booga, causing her to violently obliterate her tormentor while the others look on in horror. Jade teases Hendrik, and she rejoins the party with Lorelei's harp in tow.

Take Jessica Albert from Dragon Quest VIII and let out the pigtails for floor-length hair; then mix her with Aishe from Dragon Quest VII, and add in Alena from Dragon Quest IV to come up with this unprecedented gunner. While somewhat fragile defensively, Jade's rapid-fire abilities like Multithrust and Multifeet are sure to make her a mainstay in any line-up. Perhaps more so than any other member, Jade is well-suited to battle elusive metal monsters from her earliest development. She does not gain any spells, but can use her innate charm to bewilder foes before sending them flying. 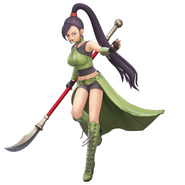 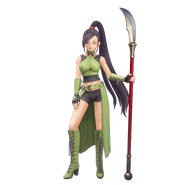 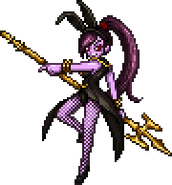 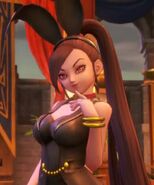 Jinxed Jade official artwork
Add a photo to this gallery

Jade's original Japanese name, Martina, is the feminine form of the Roman name Martinus. The name ultimately derives from Mars, the Roman god of war, and befits her role as a martial artist. Martina was a 3rd-century patron saint of the city of Rome.

Her localised name, Jade, is derived from the ornamental stone of the same name, which is used in jewelry and artwork. It is also a shade of green, which fits as the majority of her outfit is coloured green. Jade was greatly valued in Asian countries. Confucius believed that jade had properties encouraging bravery, honesty, and purity.

Retrieved from "https://dragonquest.fandom.com/wiki/Jade?oldid=172450"
Community content is available under CC-BY-SA unless otherwise noted.