Jamirus is a villain and a boss in Dragon Quest VI, as well as a recurring monster in the Dragon Quest series.

Jamirus is a very cruel and sadistic demon with a fondness for luring people to his island to be sacrificed to Mortamor.

In VI he orders his minions to ferry the townspeople of Aridea to an island called the Isle O' Smiles (Land of Happiness in the "No Progress" translation), where he and other monsters sacrifice them to Mortamor, turning them to stone. The people, however, are tricked into thinking it's a party island where dreams come true. While nobody ever comes back from the land of happiness, people assume it's just because they're "so happy there". The "boat" Jamirus' minions use to take people there is strangely a magical floating island of some kind. Upon boarding the "boat", Jamirus' minions drug the guests before taking them to his island to be sacrificed. The party of the game falls victim to this and are about to be sacrificed by Jamirus before starting a boss battle against him.

When the party encounters Jamirus himself, he is giving a speech to a horde of monsters that he intends to take leadership of the demon clan due to the death of Murdaw. Jamirus does not realize that the party are the people who killed Murdaw until after he's already defeated. Upon his death, the party takes ownership of his "land of happiness" ship as their new means of transportation in the dream world.

Jamirus has a seal cast upon him that keeps the Medal King's castle banished so long as he is alive. After his defeat, the seal is of course released. It is unknown whether he cast it personally, or if Murdaw, whom seems to have greater powers over the dream world, did it.

Jamirus is a boss and is seen giving a speech somewhat like the one he gives in Dragon Quest VI.

In Dragon Quest Monsters Joker 2, Jamirus has largely been reduced to the role of a thug, attempting to kidnap a small girl named Melonie. In this game, he fights alongside Gemon from Dragon Quest VIII. Gemon is roughly three times Jamirus' size in this game despite Jamirus having been presented as very large in Dragon Quest VI. In this game's continuity, Jamirus is the son of Gemon, and Gemon retrieves Melonie to be Jamirus' "nest mate".

It's possible to breed and synthesize to obtain Jamirus. Jamirus Appears as a Mini-Boss in Cragavation before Gemon and can be acquired to synthesise Gryphon and Pazuzu. 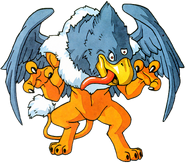 Jamirus' artwork for the original VI.
Add a photo to this gallery

Retrieved from "https://dragonquest.fandom.com/wiki/Jamirus?oldid=185170"
Community content is available under CC-BY-SA unless otherwise noted.