Jasper is a character and secondary antagonist in Dragon Quest XI. He is known as the cold-blooded strategist of the Kingdom of Heliodor.

Jasper is an attractive, older man with cruel features and a youthful appearance. He has fair skin, small yellow eyes, and chin-length light blond hair with some of the fringe covering the right side of his face and a long ponytail that goes down to his waist. He wears an ornate suit of silver and gold knight's armour over chainmail, white trousers, and a white pair of boots. Attached to his armour is a long white cape with red lining that reaches down to his feet. Emblazoned on the front of his armour's breastplate is a golden two-headed eagle, which is the symbol of Heliodor. When his master conquers all of Erdrea, he has an outfit resembling a cross between Dhoulmagus and Nelgel's, his skin is a shade of lavender, his ponytail is tucked into the outfit, and his fingernails are black.

When transforming into his Unbound form, his appearance is a mix of Burmese King Bermud and Corvus. In addition, his hair is completely loose, and his skin is little darker on purple, with the Silver Orb in his chest.

Jasper is a ruthless tactician and is skilled in the art of war. He is known for his accurate judgement and decisiveness and has achieved many victories due to his skill, such as securing victory against a large army of monsters with only a small force. Although he is a soldier, he is also capable of using powerful magic, as well. Jasper is childhood friends with Hendrik, both undergoing knighthood training at the same time, but Jasper bears a jealous streak towards him for being more well-liked.

Jasper and Hendrik were childhood friends who trained as junior knights for King Carnelian. At a young age, they met Princess Jade, both amazed and stunned by the babe. They vowed that they would protect Heliodor together at this time.

Later into their training, Jasper proposed that they would sneak into the King's room at night via a secret passage in the kitchen. However, the king noticed and scolded Hendrik for such actions. (Jasper was running late to the agreed meet time.)

At Hendrik's knighting ceremony he reached out for to Hendrik for a handshake. Hendrik ignored him and proceeded to accept his knighthood. Infuriated, Jasper made a pact with Mordegon. By assisting him, Jasper was promised great might and power.

By the events of the game, Jasper had also received his Knighthood, becoming Heliodor’s celebrated tactician. When the Luminary came to visit King Carnelian, Jasper was sent to Cobblestone to kill the villagers. However, Hendrik came to save the villagers and locked them up instead.

Jasper later catches up to the Luminary in Gondolia, after silencing the Mayor's son. He and his men successfully capture Erik.

He then used Erik as a way to lure out the Luminary (now dubbed Darkspawn) and had his men search the city for the Darkspawn. His soldiers failed, so Jasper engaged the party on their rescue attempt but was soundly defeated.

As the Luminary and his party were escaping via the Salty Stallion, he summoned a tentacular to stop them. However, it was scared away by the Gondolia merchant ships, but not before he warned the Darkspawn that he will be there when his luck runs out.

He later went to the Sniflheim Royal Library after hearing about Krystalinda being entrapped in a book. He released her and requested she dispose of Hendrik.

Jasper continued to serve Mordegon until his master's reveal at Yggdrasil. He then attacks the Luminary by surprise with the power of the dark orb he obtained from his master. With this, he defeats the party and attempts to take the Sword of Light before Hendrik arrived.

Mordegon ambushes Hendrik and praised Jasper for his success. After the fall of Yggdrasil, he gave Jasper the Silver Orb and made him Supreme Commander of the Spectral Sentinels.

Jasper has taken up residence within the now-ruined Heliodor Castle. When Hendrik and the Luminary approach the castle's throne room, Jasper is waiting there.

He taunts Hendrik about his gullibility and his recent conversion to the Luminary’s side. He then clashes with Hendrik and reveals the reasoning behind his actions.

While Hendrik is able to beat him back, he then retreats, transforming into a demon and gloating about how he has now “surpassed Hendrik”. He then leaves Tyriant to dispose of the Luminary.

Jasper is not seen until the party reaches the Fortress of Fear. He watches on high as they defeat the penultimate Spectral Sentinel, Indignus.

He then ambushes them by creating an illusion of Veronica. Serena is able to dispose of the illusion by using her lyre. Hendrik then correctly assumes Jasper is behind it. Jasper confirms this and attacks the party in his Unbound form.

Although he is defeated, Jasper makes a last ditch attempt to sever the Luminary’s friends and make him fight the Lord of Shadows one-on-one. He does succeed in doing so temporarily, however they are able to overcome Jasper's attack and he begins to fade away. He then confesses that he was actually just envious of Hendrik and Hendrik says he always thought Jasper was stronger. He then leaves Hendrik his knight's emblem.

Jasper then vanishes in a cloud of smoke, leaving behind his knights emblem for Hendrik to claim.

After Mordegon's death at Heliodor Castle, Jasper's restless spirit begins to haunt it. By following the spirit, the party find a root of Yggdrasil in the courtyard, which recounts his youth alongside Hendrik.

Tracking the spirit further to the Banquet Hall, Henrik reveals that, after Dundrasil fell, Jasper helped Hendrik escort Carnelian back to safety. However, Hendrik was promoted to general while the king ignored and ostracised Jasper, causing his resentment, which was Mordegon's plan to mould him into his second in command.

The spirit then moves around the castle, and finally goes to the balcony. When told by Hendrik to show himself, Jasper does just that and bemoans his fate. The Luminary and his allies prepare to fight him, but Hendrik vows to face him alone, to which the Hero agrees. Despite a harrowing fight, Hendrik triumphs and Jasper curses his loss once more. Hendrik says the same words he did at the Fortress of Fear, causing Jasper's spirit to calm down and forgive him in return. Jasper then explains that while his light did guide Hendrik, it only blackened while his old friend's grew brighter, and he found more kinship with Mordegon and his monster minions; he was corrupted by the darkness in his heart before he knew it. He asks Hendrik if he still considers him to be his friend and comrade, to which he agrees. Jasper, feeling comforted, lays his Platinum sword down and his spirit merges with Hendrik's armour creating the Twin Eagle armour. Hendrik then lays his old friend's knight's emblem onto the sword, finally having found closure once more, this time for good.

Shadow Jasper before Hendrik's fight with him. 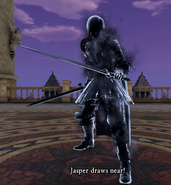 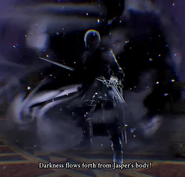 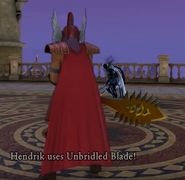 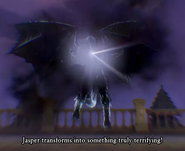 Shadow Jasper reverts from Unhinged form to his normal form. 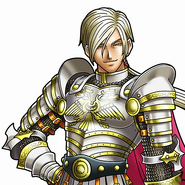 Jasper, as seen in Dragon Quest of the Stars
Add a photo to this gallery

Retrieved from "https://dragonquest.fandom.com/wiki/Jasper?oldid=191457"
Community content is available under CC-BY-SA unless otherwise noted.