Jessica Albert is a character in Dragon Quest VIII. A girl from a good home, she comes from a wealthy family in the small village of Alexandria. However, contrary to her upbringing, she is unskilled in the social niceties and expected behaviour of her environment, which often leads to conflict with her mother. She joins up with the Hero for personal reasons, strengthening the party with her flair for offensive magic. Something of a tomboy, Jessica is nothing like her mother, who expects her to be prim and proper in public.

Magic is far from Jessica's only strength; she is also an outstanding fighter. Whips, staves, knives and later swords are her weapons of choice.

Jessica's appearance changes when she equips certain armour such as the dangerous bustier and the magic bikini.

Jessica has red hair in a form of long pigtails with a few strands of it hanging over her face. She wears a low-cut purple blouse with sleeves starting at the upper part of her arm. She has a yellow corset-like article of clothing around her stomach and waist, which has an auburn belt around it that a small pouch hangs from. She has a long, maroon colored skirt that has a white frill at the bottom. One can see that she has brownish-black stockings under the skirt, and pointed, brown shoes, into which the stockings are tucked.

Jessica also has other outfits such as:

This is the outfit you first see Jessica in when you meet her.
This is Jessica's only outfit that doesn't show off her mature curves. She has a white dress shirt with a red tie. Her skirt is long and black. It is found in her closet in Alexandria after obtaining her.

This outfit consists of a white bra and a reddish-orange skirt tied off at the hip.

This outfit can be made if you put the silk bustier and the bunny tail in the Alchemy Pot. The appearance change is triggered by equipping Jessica with the bunny suit along with bunny ears and fishnet stockings. The result is a black bunny outfit. It can also be obtained by clearing the second level of the Monster Arena.

This outfit increases Jessica's magic defence. This outfit is a blue and yellow bikini with a sarong around her waist.

The only purpose of this outfit is to use it in the Alchemy Pot to make the Divine bustier. It is a black corset-like article with an open slash in the front which is laced to keep from falling apart.
It straps around the back and and the part covering her rear is shaped like a heart. Two are found in the game so you can have the dangerous and divine bustier at the same time.

Jessica's most defensive outfit. It increases her evasion and defense greatly. She has a purple and gold, low-cut blouse that is tied off to a brace-like necklace. And in the middle of this blouse is a laced open part that shows her skin, but can look like a zipper if not examined closely. She has a miniskirt attached to the blouse, but most of her legs are covered by white, decorated with purple and gold stockings. She wears long, white gloves with a similar decoration than her tights. She has wings (strictly for style) on her back. This whole outfit strongly resembles the Staff of Resurrection.

Jessica is a tomboy, which leads to much friction with her mother. Jessica is very loyal, going to the great length of avenging her brother at the cost of being disowned by her mother. Jessica has a stubborn side, shown when she refuses to leave Maella Abbey until she gives Angelo's ring back to him.

Jessica is introduced after The Hero and Yangus reach the top of the Tower of Alexandria, mistaking the two as the murderers of her brother, Alistair, who was slain by Dhoulmagus. After witnessing a vision of her brother's demise, learning it was the evil jester, she has a change of heart and resolves to join the party. However, her mother initially refuses, causing a falling out between the two. After joining the group and travelling to Maella Abbey, Jessica plays a key role in reining in the flirtatious Angelo. Later on, after destroying Dhoulmagus, Jessica retrieves the sceptre of Rhapthorne, and is suddenly possessed by its dark power. After a difficult battle, Jessica is freed from the staff's influence, and relies the truth about the party's real enemy. At the end of the story, Jessica has reconciled with her mother and informs the player of what has transpired after the defeat of Rhapthorne.

In the new alternate ending in the Nintendo 3DS-adaptation, after certain requirements are met, Jessica will reveal her true feelings for the hero and marry him. 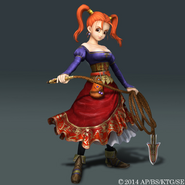 Jessica in a Dancer's Costume in DQVIII.

Jessica in a Bunny Girl Costume in DQVIII.

Jessica in a Magic Bikini in DQVIII.

Jessica in a Dangerous Bustier in DQVIII.

Jessica in a Divine Bustier in DQVIII.

Jessica when possessed by Rhapthorne turning into "Evil Jessica"