Juggerwroth, the strongest servant of Rhapthorne, is a monster introduced in the 3DS remake of Dragon Quest VIII.

Juggerwroth is a massive demon with the lower body of a sauropod and the torso of a muscular humanoid. His skin is teal adorned with scarlet tattoos. His shoulders are lined with large spikes, and his head is crowned with ram's horns.

After the sealing of Rhapthorne, the Seven Sages were too exhausted to properly deal with Juggerwroth. Instead of destroying him, or locking him away in an inanimate object like they had done with Rhapthorne, they were forced to turn him into stone and prayed no one would ever find him lest he accidentally be revived. After Rhapthorne's complete revival, the fortune teller Kalderasha has a vision thanks to his crystal ball, and suggest the party to visit again The Holy Isle of Neos, now in complete ruin due to the ascent of the Black Citadel. There Jessica starts to have a headache, showing her a vision of the Dragon Graveyard; reaching the location the party finds a recording of the great Sage Golding warning about the beast. Realizing his imminent reawakening, the party then heads to the Altar of Wroth to stop Juggerwroth's return, an underground location which is both coincidently and ironically near where his master was sealed. After fighting through the various monsters inhabitating the ruins (Phoenixs, Great keepers, Night riders, Corpse corporals, etc.), they arrive just in time as the beast breaks free of his stone prison. He rants about how much time he had spent to break the sages stone seal then, sensing that his master has returned, Juggerwroth is ready to join again his side, but he quickly sees the party. He wonders what they are doing in his lair but he summarily decides to fight the party to relieve his boredom, after of which he'll defeat the seven sages next, unaware that they already died, and so have their descendants. After the first round, he feigns defeat only to use a gravity field to weigh the party down and kill them. However, Marcello, who was tailing them for some time, shows up and saves the Hero and his friends, much to Juggerwroth's annoyance. Marcello taunts him and Juggerwroth powers himself up, becoming entirely purple. He then proceeds to fight the party, but with the addition of Marcello. Despite his improved abilities, he is defeated again, much to his horror, dissipating for good. Marcello, having now repaid the life debt he had with his half-brother Angelo, then departs never to be seen again. 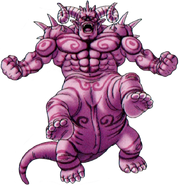 Juggerwroth, in a powered up state 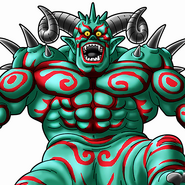 Juggerwroth, as seen in Dragon Quest of the Stars
Add a photo to this gallery

Retrieved from "https://dragonquest.fandom.com/wiki/Juggerwroth?oldid=214422"
Community content is available under CC-BY-SA unless otherwise noted.