A killing machine is a monster who appears in the Dragon Quest series.

Killing machines are four-legged robots with suction-cup-like feet, a single red eye, and are primarily blue in colour. In most games they are featured in the killing machine holds a single-edged sword in its right hand and has a crossbow for a left arm with the bolts stored in a quiver worn on its back, the strap going across its upper body, though there are rare occasions where they have a normal left arm instead of a crossbow.

Interestingly, the default name of the killing machine is KB. One interpretation of this is 'Killer Bot', a likely reference to its Japanese name and present one.

As in the first game in the series, Killing Machines are made through synthesis - however, they have been downgraded to A-Rank. They still require the same fusion process, but given the amount of time needed to fuse a mechan-o'-wyrm, and the abundance of Phantom Swordsmen in the wild, fusing a hunter mech with a phantom swordsman is generally the better choice. They can also be found in the Dark World, from one of the random portals on the floor. Just as with other monsters in the Dark World, they are very difficult to scout, but with proper team preparation can be done.

The Killing Machine appears in the manga and its anime adaptations. According to Brass, it is a weapon devised by Hadlar to kill the hero. It was repurposed under Temujin's orders to allow human pilots to control it, as was the case of Baron. It was launched by the latter two as a means to kill Dai and Brass in a staged coup in order to allow princess Leona to die from poisoning, thereby securing Temujin's position as Papnica's ruler. However, the Killing Machine was destroyed disabled by Dai, while Brass healed Leona from her venom, thereby leaving Temujin defenseless and arrested for treason. The Killing Machine is not seen afterwards.

Interestingly enough, not much is known about its usage during Hadlar's era, although given it was recognized by the Papnica officers, it can be assumed the weapon had already earned some infamy. 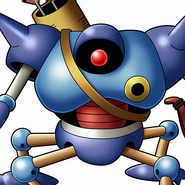 Killing machine, as seen in Dragon Quest of the Stars