Dragon Quest IX
King Godwyn is a character and the false secondary antagonist in Dragon Quest IX. This cruel and evil king was responsible for the rise of the Gittish Empire. His army was defeated by Greygnarl and his allies 300 years ago, but has recently returned...

Godwyn was an evil king with a complete lack of morals that wished to take over the world, and was also willing to murder his father to seize power, showing his impatience. However, he admires the Hero for coming this far, and Aqulia for presenting fake Fyggs, while feigning loyalty to the Empire before attempting to kill him.

A spoiler draws near! Click 'show' to display, otherwise run away!
Godwyn was once the heir to the House of Gitt, who ruled over Coffinwell. Ambitious, he confided in what would later become his Triumgorate, that he wanted to kill his father because he wanted to create his own world spanning empire, having grown tired of waiting. He assassinated his father Godfrey, along with any other threats to his power, and from there, the Gittish Empire was born. Fearing that someone could surpass him, he has his army capture the Celestrian Corvus after he fended off a force that laid claim to Wormwood Creek and began siphoning his power in order to summon Barbarus and eliminate all opposition. He was seemingly stopped when Greygnarl and his forces put a stop to Godwyn's reign.

However, his prisoner Corvus remained in the Oubliette beneath his palace. Consumed with bitter hatred at the Empire's abuse and the betrayal of the citizens of Wormwood while chained down there for 300 years, he resurrected Godwyn, Barbarus, & the Triumgorate in order to bring ruin to the world. Godwyn's forces quickly captured the Celestrians that descended after the Fyggs fell to the Protectorate, and he sought the Fyggs to assure his own world domination (Unaware that Corvus was using him).

He is first heard after the Hero collected all the Fyggs and has to hand them over to Aquila, since Celestrains cannot act above their superiors, commanding his teacher to hand them over to him, as promised. The Celestrain reluctantly agrees, defeats his student, and leaves the Starflight Express for Barbarus and Hootingham-Gore to crash. Unbeknownst to the Head of the House of Gitt and the Empire, however, Aquila returned the Fyggs to Apus Major at the Observatory.

Actually posing as a defector, Aquila presented counterfeit Fyggs to Godwyn, intending to slay the king and rescue Corvus. However, Godwyn wounded him, leaving the task to the hero. The two then battle and Godwyn turns into a skeletal monster of epic proportions. Despite the new form, he is defeated and attempts to kill the Hero for good, but is slain by Aquila at the cost of his own life.

Before starting the fight, you should make sure you have a few Magic Waters/Sage's Elixir's handy, as this is a two-part fight.

In his first form, Godwyn can use a weak physical attack, Kafrizz, Thin Air and an attack that flings his ball from his staff that also deals two hits to random characters for moderate damage, that can add up if they hit the same character. He is also the first boss to use Disruptive Wave, which removes all buffs (or debuffs) from the party.

The best strategy is to have a Mage cast Oomph on your physical attackers (and again whenever he uses Disruptive Wave), and for sword-wielders to use Falcon Slash, and any other attackers to use their best abilities. You should definitely have a Priest or Sage for healing.

The battle with Godwyn's second form is initiated immediately after defeating the first, with no chance to heal in between. He still uses Kafrizz and Disruptive Wave, but now has a guaranteed critical attack in addition to his regular attack, Inferno, as well as Kabuff and Magic Barrier. He also has a shield which will occasionally block attacks.

A similar strategy to the first form applies here, though King Godwyn can now buff himself up, so you could try and remove that with Sap, or, if you have it, use Disruptive Wave on him. 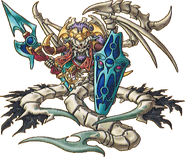 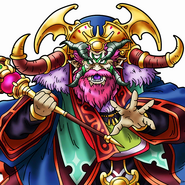 King Godwyn, as seen in Dragon Quest of the Stars 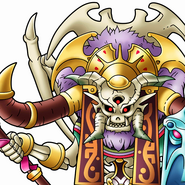 King Godwyn's Final Form, as seen in Dragon Quest of the Stars
Add a photo to this gallery

Retrieved from "https://dragonquest.fandom.com/wiki/King_Godwyn?oldid=204085"
Community content is available under CC-BY-SA unless otherwise noted.