King Korol is the founder of the Order of Zugzwang, found in the deepest part of the Crocodilopolis. Korol can hit hard with C-C-Cold Breath and, of course, use Disruptive Wave as well.

Korol is a large green crocodile wearing a very royal garb, due to being the high priest of the Order of Zugswang. They have small, red pupils and keeps their eyes half-closed. They carry a golden staff with a small, golden dragon curled at the tip.

Not much is known about Korol's personality, as they only speak briefly to the party. From what we can tell, however, Korol is very loyal to Nimzo. They express surprise when pointing out how the team had bested their right-hand, Queen Ferz, but not sadness or any desire for revenge despite Ferz's admiration and loyalty to the King. Therefore, it is reasonable to assume that they do not have any attachment to their followers. They also have an inflated sense of self-worth, being absolutely shocked when Nimzo did not grant their last request and when Bishop Ladja revealed that they were only a figurehead priest.

In the DS localization of V, they will occasionally hiss like a snake, dragging out the 's' in words like 'disssmay' and also frequently say -Snap!- in their dialogue.

King Korol is a major antagonist in Dragon Quest V. They are the leader of a cult that uses slaves to build a giant palace called the “Crocodilopolis” (or the “White King’s Paradise” in early translations) in their honor. King Korol is not seen for most of the game but is mentioned often by their slaves and slave masters as “Our Dear Leader,” or "High Priest" and by Queen Ferz as the "God-King". Korol's slave drivers promise that once their palace is finished the slaves will be released, some of the slaves being delusional enough to believe this is true. The protagonist of the game himself is captured as a child and forced to slave away building King Korol’s palace for ten years.

King Korol appears very late in the game, only being referenced by other characters before your confrontation with them in Crocodilopolis. This sets them apart from such villains and Kon, Slon, and Ladja, who are much more active during your journey. This is most likely due to their status as the high-priest of the Order, as they simply get others to do their bidding. When they are finally confronted, they fight the party alone. Despite their efforts, they eventually admit defeat and pray to Nimzo, begging him to grant them the strength they need to open a portal to Nadiria. Nimzo, however, does not respond. Instead, Bishop Ladja appears behind the King and mercilessly reveals that they have only ever been a figurehead priest. He then kills King Korol with Kafrizzle, similar to how he killed the hero's father, Pankraz.

King Korol is a single space A rank monster from the demon family.

Recipe: Tortured soul x Great dragon (Rashaverak may be used as a substitute for the Great Dragon however.

It is suggested that you do use Rashaverak in fact, as in the Professional version Rashaverak are actually required to make Great Dragons.)

King Korol is still a single space A rank monster, however now they are from the dragon family. 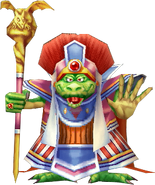 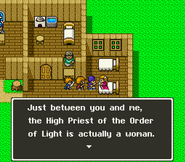 Retrieved from "https://dragonquest.fandom.com/wiki/King_Korol?oldid=175129"
Community content is available under CC-BY-SA unless otherwise noted.