King Latem is a boss in Dragon Quest Swords. He is one of several Mirror bosses which are available only after completing the main story. He is a Metal King Slime and a member of the rare metals family of monsters.

King Latem will run from battle after 25 seconds, giving the player limited time in which to kill him. He has no attacks, and will move around constantly before running away. He has just 12HP, but all weapons deal 1 damage to him. The player can greatly increase their chances of killing him by using the Metal King Sword, which deals 2 damage per hit.

King Latem if the player's fought him before. 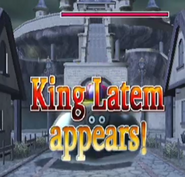 Retrieved from "https://dragonquest.fandom.com/wiki/King_Latem?oldid=179934"
Community content is available under CC-BY-SA unless otherwise noted.