Kon the Knight (formerly Jahmi, Jami and Kon) is a character in Dragon Quest V and a member of the Order of Zugzwang.

He is a white muscle horse covered in grey scales. He has a large red mane and red eyes. He is often seen grinning widely.

Kon the Knight is a brutal antagonist who isn't above murdering his opponents on the orders of Bishop Ladja. Initially loyal to Ladja, he eventually gets a castle to rule over and gets some subjects who talk up to him, making him feared as a king. Despite this, he still calls on Ladja's help when he knows that he's outmatched.

In the English localization of the DS version of V, he has a thick Russian accent, like all members of the Order of Zugzwang, and nearly all of his dialogue is turned into puns based off of horses.

Sometime between these events and when the hero escapes the Order, Kon is given a castle to rule over. Once the main character's wife gives birth to her twins, the chancellor kidnaps her while a maid hides with the twins. The Chancellor was apparently under orders from Kon, but Kon double-crossed him and the chancellor ended up dying, though it's unclear whether it was actually Kon or some other monster who killed him.

In the SNES version of the game, Kon petrifies the protagonist and his wife after his boss battle as his last dying act. In the PS2/DS version, Kon calls on Ladja to help him and Ladja teleports him away before Ladja appears to petrify them. Kon never appears again so it is possible that he could have survived, though considering Ladja kills Korol and the fact Kon never appears again it is also possible that Ladja killed Kon as punishment for his failure. 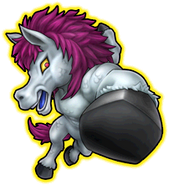 Kon the Knight's artwork for MBRV. 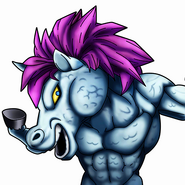 Kon the Knight, as seen in Dragon Quest of the Stars
Add a photo to this gallery

Retrieved from "https://dragonquest.fandom.com/wiki/Kon_the_Knight?oldid=186639"
Community content is available under CC-BY-SA unless otherwise noted.