Krystalinda is a minor antagonist in Dragon Quest XI. She is an ice witch who froze Sniflheim in its entirety.

Krystalinda is a beautiful, voluptuous woman with long white-blonde hair worn in a large, unkempt ponytail, light purple "frost-bitten" skin, and dark purple lipstick and eye-shadow. She wears a gold circlet adorned with rubies, a diamond-shaped gold and ruby hair-clip on her forehead, a triple-looped necklace, a dark purple cape with a ragged collar, a silver jumpsuit (which appears sky blue in game), with orange fasteners and an embroidered pattern on each thigh, and matching armlets and high-heeled ankle boots. She is always seen holding a maroon staff with an icicle-covered tip.

According to a book in the Royal Library, Krystalinda was once a human who was born in the land that would eventually become Sniflheim and was said to have been more beautiful than any other girl. However, she was cold hearted and detested the idea of someone being more beautiful than her. Knowing fully well that she will eventually lose her beauty as she grew older, she turned to witchcraft in order to gain eternal beauty. Though she was successful, her body became as cold as ice. Even her breath was said to freeze anything it touched.

She eventually fought against the wizard Morcant, who, after fighting her to a stalemate, made a pact with a friendly local creature that he and his companions had purified from his Malicious state, named Jörmun. The creature would absorb some of Krystalinda's powers while Morcant sealed her away inside a magic book. Afterwards, Morcant hid the book in the Royal Library, where it remained for many centuries.

Three months prior to the events of the game, her book is discovered by Jasper, a knight from Heliodor. He offered to free her from the book, but one condition: she must freeze Sniflheim. Once she does, Hendrik, another knight from Heliodor who wears the pendant as Jasper, will be sent to save the city. When he arrives, Krystalinda is to kill him. Having fallen for his looks, Krystalinda agreed to do as he said. After being freed from the book, she went to Sniflheim and froze the entire city. In addition, she captured Sniflheim's ruler, Queen Frysabel, and imprisoned her inside her book while she disguised herself as Frysabel. Three months later, when Hendrick and his men arrived in Sniflheim, Krystalinda, disguised as Frysabel, sent him to the Hekswood to kill Jörmun, so that she could regain all of the former strength.

Shortly after this, the Luminary and his group arrive in Sniflheim while searching for the Blue Orb. Krystalinda sends them to deal with the monster. Later, sensing that Jörmun has been killed, she heads to the Hekswood to dispose of the Luminary and Hendrik. However, she is forced to flee after being attacked by the Luminary's group, with Veronica's attack leaving a burn mark on her neck. She is later confronted by the Luminary's group, who expose her disguise and fight her. After being defeated, Snorri, a royal scholar of Sniflheim, proceeds to seal her away in her book. However, due to Snorri briefly pausing while chanting the spell, Krystalinda is able to break free from the book, but ends up using nearly all of the magic to do so. Afterwards, with Sniflheim being unfrozen, Krystalinda disguises herself as Frysabel and invites the Luminary and his group into the palace. Unfortunately, before she could take the book from them, Frysabel, who is still inside the book, warns the group about Krystalinda. Wishing to see which one is the true queen, Snorri asks both Krystalinda and Frysabel one question: What is the true treasure of Sniflheim? Krystalinda believes that it is the Blue Orb, while Frysabel reveals that it is the people of Sniflheim. After being exposed as the imposter, Krystalinda sheds her disguise and frees Frysabel from the book. Just as Snorri orders her to be locked in the dungeon, Frysabel steps in front of her and orders her men to spare Krystalinda. She reveals that while she was trapped in the book, Krystalinda spoke to her listened to what she had to say, and helped her understand what it means to be a queen. Because of this, Frysabel belives that Krystalinda does not have an evil heart and asks that she be allowed to live. Hearing this, Snorri decides to give Krystalinda another chance. Grateful to Frysabel, Krystalinda decides remain by her side as her advisor.

Appears as part of the 9th card series.

Appears as part of the Dragon Quest XI story event in the game. 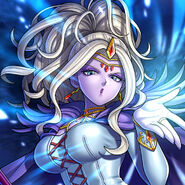 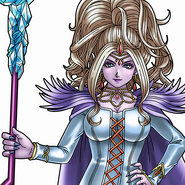 Krystalinda, as seen in Dragon Quest of the Stars