The liquid metal shield (originally Shield of the Lone Metal Slime) is a rather rare shield in the series, having been supplanted by the Metal king shield in V.

It is an immensely durable shield, easily among the top tier in each game it appears in.

The liquid metal shield has a defence bonus of +60, and casts Snub when used as a tool in battle. In the remakes of IV, it also cuts fire and ice breath damage by 40 points.

A shield made with liquid metal slimes that guards against magical attacks.

Can be upgraded to Metal king shield.

This shield is generally considered the most difficult item to acquire in the game due to high randomness associated with winning it by playing Tombola. Note that the player must win the special prize twice in order to receive it. 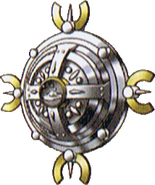 The shield's current appearance.
Add a photo to this gallery

Retrieved from "https://dragonquest.fandom.com/wiki/Liquid_metal_shield?oldid=179389"
Community content is available under CC-BY-SA unless otherwise noted.