A mandrake major is a monster who appears in the Dragon Quest series.

Mandrake majors are blue-green dragons with orange spines and wing webbing. They are humanoid in pose, though their limbs are short enough to make them look better suited to quadrupedal movement, and have large wings and a long neck and tail. They are equipped with a sword and shield, as well as having some armor and a helmet that fits to their heads. 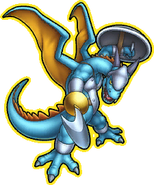 Mandrake major's second artwork for MBRV.
Add a photo to this gallery

Retrieved from "https://dragonquest.fandom.com/wiki/Mandrake_major?oldid=188080"
Community content is available under CC-BY-SA unless otherwise noted.