The mandrake mercenary is a monster who appears in the Dragon Quest series.

The Mandrake mercenary is both a regular and boss monster that players fight in Dragon Quest VII, as well as a recurring monster in the series. It appears as a regular enemy in the Nottagen Cavern and Hubble area (past), and as a boss in Providence. Note that these regions can be done in any order once accessible, so which variant players encounter first will vary. The boss version is unwinnable due to plotline restrictions, but the second fight is a regular battle.

The Mandrake Mercenary itself reappears in X, being slightly stronger than the majors, but outclassed by the Mandrake marshals and the newly appearing Ash lizards and Red moon warriors. 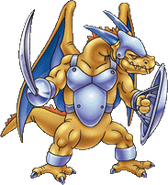 Mandrake mercenary's original art
Add a photo to this gallery

Retrieved from "https://dragonquest.fandom.com/wiki/Mandrake_mercenary?oldid=202337"
Community content is available under CC-BY-SA unless otherwise noted.