The Marquis de Léon is a monster in Dragon Quest IV. He controls the Palais de Léon, in the form of a lion monster.

Has the appearance of the Hellion monster family

Not much is known about him as a human, although it is implied that he struck a deal with Psaro the Manslayer, which led to him and his entire kingdom being brainwashed into servitude (likely a result of naivety and lack of common sense). As a monster, Marquis de Léon was a brutal tyrant, striking fear into the citizens in not only his kingdom, but the entire continent. It is known that several unfortunate citizens were locked up in prison simply for displeasing him. While he worked alongside Balzack, the two did not appear to work very well together, as the Marquis admonished the latter for losing a battle and sent him away to another kingdom when given the chance. When two of his prisoners escaped prison and fled the continent, Marquis de Léon no longer allowed any form of immigration off the continent by banning all ship transportations.

Once the prince of Palais de Léon and the son of the previous king, Marquis de Léon is now a servant of Psaro the Manslayer. Having used the Secret of Evolution to transform into a lion-like monster, he imprisoned his father and took the throne for himself, claiming that his father passed away.

In Chapter 4, Meena, Maya, and Oojam infiltrate the palace in search for Balzack, who murdered the former two's father. They confront and defeat him in the hidden throne room. Having witnessed this (while not being in sight), Marquis de Léon reprimands Balzack for his failure and proceeds to defeat the three himself with ease. The three are then imprisoned in the same cell as the old king, who helps them escape.

Much later in Chapter 5, Marquis de Léon once again encounters the sisters, this time with the Legendary Hero in tow. By this point, the Marquis already sent Balzack away to Zamoksva, no longer requiring his help. He then once again engages the heroes in combat, resulting in his defeat.

Marquis de Léon's fate differs between the originals and the remakes. In the NES version, he dies after his defeat. In the remakes, he turns back to his human form, having no memory of his servitude to Psaro. This implies that he was brainwashed into serving the Master of Monsterkind rather than through his own free will. According to an NPC in Havre Léon, the prince made a deal with the devil in exchange for his soul, which may be the cause of his mind-control. Upon his defeat, the entire kingdom wake up from a trance, meaning that everyone was under Psaro's spell rather than just the Marquis.

The Marquis de Leon, known as KingLeo, is a high-ranking Beast class monster obtained by having two Trumpeters breed in the Starry Shrine.

KingLeo is obtained the same way as in Monsters.

The Marquis de Leon appears as a Giant Monster boss after encountering Captain Crow for the fourth time, which is accessible after defeating the final boss of the storyline.

Additionally, he can be synthesized using a Buffalogre and Mohawker, and can be synthesized with a Hyper heyedra to create a Gripevine. He is also one of the component monsters for obtaining Leonyx. The others are Wildcard, Orochi, and Don Mole .

The Marquis de Leon is fought by the heroes at the top of the Pillar of Light.

The Marquis de Leon is fought by the three heroes while travelling on the continent of Batraccia. Originally defeated many years earlier by the Questocrat Gaius, he was brought back to life by the dark Squirril Ferril. He tries to make the elf queen his bride, but the three heroes stop him, enraging the Hellion. When they reach his hideout, he battles them, but loses the fight. Ferril states that he didn't obey him and mockingly thanks the three heroes and Cyril for defeating him. He also appears in the DQIV event, reprising his role of a boss. Just like IV, he speaks with a French accent. 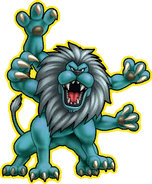 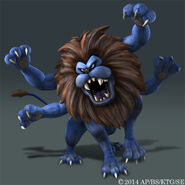 Marquis de Léon's artwork for TWTWBB.
Add a photo to this gallery

Retrieved from "https://dragonquest.fandom.com/wiki/Marquis_de_L%C3%A9on?oldid=188248"
Community content is available under CC-BY-SA unless otherwise noted.