Instead of relying on swords, the Fighter uses his very body as a weapon.
— Dragon Quest VII

The Martial Artist, also known as Fighter, is a character class in the Dragon Quest series.

Martial Artists have a great amount of speed, agility, and strength. They can deal devastating amounts of damage from a single strike, and can be equipped with a variety of weapons. However, if equipped with any weapon other than a claw, a Fighter's abilities will actually decrease, as his or her attack power will lower considerably. This is because Fighters prefer to attack with their bare hands, and so only claw type weapons will make their attack power rise.

A Martial Artist has a higher chance of scoring a critical hit on an enemy than other classes.

The Martial Artist (or Fighter)

The Martial Artist skill Wind Beast is worth learning as it grows in strength the higher the level. In terms of development, the fighter class is required to master in order to become a Dragoon and Paladin. The great thing about fighter class is that these two classes combine to make a Godhand. The Godhand is worth investing some time and battles in getting if the player is looking to go to the bonus dungeons.

The Martial Artist hybrid skills are not very exciting except for Jock Dance. However, Roundhouse does the same thing and it doesn't require changing into a Dancer to do so.

The Martial Artist vocation is available after visiting Stornway and has the unique skill set "Focus." Martial Artists can also use skill points to learn Fan, Staff, Claw, and Fisticuffs skills. Their Coup-de-Grace is "Roaring Tirade," which terrorizes all enemies and raises tension by one level.

A Standard Vocation which needs to be of at least level 50 to access the Battlemaster, Paladin and Gladiator Specialist Vocations. 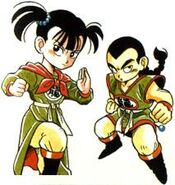