Originally from Dragon Quest: The Adventure of Dai

Matoriv is a character in Dragon Quest: The Adventure of Dai. He is a former member of Avan's party who faced Hadlar in the past and the older brother of Masopho. He becomes Popp's teacher.

He has mastered over 100 spells, and created both Donk and Frizz Cracker. He experimented with Forbidden Magic that should be only used by Monsters, which shortened his lifespan and gave him some health issues, although he still managed to live close to a very advanced age.

Although a hero of the past war and a close friend of Avan, Matoriv, by far and lot does not behave as one of his fame would. He's snarky, grumpy, arrogant, self-important and even mocking. Following the years after the war he became a bit of a misanthrope, growing disillusioned with people, thinking them as selfish and ungrateful for forgetting about the heroes.

Although initially unwilling to help Dai's party since he sought to not involve himself too deeply in the current war, he changes his opinion after learning of Avan's demise and seeing Avan's likeliness on Dai, showing he truly respected Avan. He proves to be a very effective, if albeit, incredibly stern instructor, particularly towards Popp to whom he is completelly merciless and pushing him over the brink. Although nasty and somewhat sadistic in his approach, deep down he means well and is fundamentally aware of how hard he can push others to grow further. He is noted to be a far more strict teacher than Avan himself, thinking of the latter of being too soft.

Matoriv is a known pervert, having no shame in assaulting Maam and her mother, and even Aimi while commenting on their body proportions.

Matoriv was once a member of Avan's party and together with Maam's mother and father, confronted the Dark Lord Hadlar's Army, bringing peace to the world. He once went to Nayle Village and was acquainted with Maam when she was younger.

He subsequently worked as an advisor for the Papnica King, but found his time there unpleasant as his coworkers pestered him repeatedly, which he attributed to jealousy of his abilities. Growing disillusioned with people for their selfishness he quit and decided to live in seclusion.

He never went to Valge Island and is unable to Zoom there.

He once studied alongside Masopho and they were close enough that called themselves brother.

17 years ago, when Avan attempted to Time Freeze Hadlar, he was part of his party alongside Brokeena while Loca and Leira split off. Not being strong enough to save Avan, he then created the Frizz Cracker ultimate destruction spell.

He once went to Ohzame as he could Zoom there. He also dabbled with Forbidden Spells, which had a cost on his health.

Matoriv was hiding in a cave near Valge Island when he notices the air balloon used by Dai's party to escape from Flazzard being pursued by a swarm of Dancing Flames and about to plummet into the whirlpool. Matoriv uses his magic power to extinguish the fiery monsters allowing the party to avoid the whirlpool and survive.

As they entered his refuge he demanded them to leave as he merely helped them on a whim, but Maam recognizes him, and he is surprised to have seen her grow so much and even touching her breasts and butt, annoying Maam seeing he remained perverted (in the 2020 version this scene is toned down to just an attempt). Maam requested his help, but he refused citing his previous bad experience and believing he would be forgotten again. Dai, however, protested his claims that humanity was selfish by referencing Avan who was the exact opposite. Seeing the likeliness of Avan in Dai and learning of both his demise and that he was Avan's last student, he decided to help, where he was explained of the situation.

Matoriv explained that Flazzard had employed a forbidden spell and to nullify the force field that drained them of their power they had to destroy the Dark Fire and Ice Spires with powerful explosives, which Baduck started to develop with the materials on the cave. Popp bragged that he could destroy them with his magic, to which he asked if he was also a disciple of Avan. Upon learning that he was, he demanded to have him for a time as he believed him too weak to be useful. He subsequently took him to Vayle Village with Zoom and put him under a training course more strict than Avan's Special Hard Course, putting him through physical tests that required stamina and submerged him with a rock to the bottom of a lake to force him to escape through his magic. In a contest of magic strength he easily defeated Popp and sent him flying, disappointed by the fact a nearly 100 year old like himself could so easily defeat a youngster, leaving Popp surprised. Matoriv decided to end the training there, but told Popp to return through his own Zoom, causing the latter to complain. Matoriv insisted that Zoom was something he could easily achieve after escaping the lake if he could have a clear image of the place he wanted to go, although Popp found it useless since Zoom was useless in battle. Matoriv scolded Popp for his naivete, declaring that a mage's duty is to support and protect their comrades through their spells, further elaborating he could have saved everyone from the falling balloon had he known how to use Zoom in the first place. He warns him that as he is currently, he will only drag the rest of the party and get himself killed before leaving.

As he returns to the cave Baduck shows his finished bombs, to which he deems them "no good" as he doesn't like their design. It is shown he had Dai practice sword fighting while blindfolded against Maam, as he explained that if he could cut through the unseen he could become stronger, hinting he wanted him to learn the remaining Air Slash. He also reveals he left Popp stranded as a form of tough love. As the sun starts to set, Flazzard communicates through Heyedras to the entire island and issues an ultimatum, that the frozen Princess Leona is having her life force drained in the ice and that she will lose her life by the next sunset. Matoriv confirms these fears as he is aware of the spell used to freeze her and suggests they strike during the night for a better chance. He describes his plan of having them board the ship he uses for fishing which will be levitated with his magic which can navigate above the whirlpool, but the ship can carry only four of them. Dai, Maam and Baduck are chosen, and while deciding for a fourth member, Popp suddenly arrives having successfully returned through Zoom after many tries, which pleases Matoriv and deems him the fourth member. With everyone restored to full capacity, Matoriv elaborates that Zoom is impossible to use due to him never setting foot on the island and that Popp could only take them to the top of the tower, directly at the centre of the force field. Popp requests to be taught more if he returns alive, to which Matoriv replies he isn't done yet with him. As Matoriv catapults the party with his power, he realizes he forgot to think of a method to guarantee a safe landing, which soon proves disastrous as the party is forced to cast wind spells to mitigate the impact.

While Dai is fighting Flazzard, trying to master the Air Slash, a scene of Matoriv talking with Aimi is shown where he explains that he made Dai train blindfolded to be able to understand that technique, but wonders if the boy could get a grasp on it, saying this with a serious face while rubbing Aimi's butt.

While Dai, Popp and Leona were fighting Baran on Teran, Matoriv went to Carl library ruins to grab the Book of Avan, a book written by Avan with three chapters: Earth (martial arts and weapon wielding), Sea (spells and skills), Sky (about the heart).

Matoriv reaches Teran in the right moment to save Popp from Zaboera and Hadlar, launching Frizz Cracker at them. Matoriv however, had serious health problems and using powerful spells affected his body. That's when Dai appears using now the power of the Dragon knight with full mastery, and easily blow the enemies away. Matoriv is taken to rest at the cottage, passing the Book of Avan to Dai, but Hyunckel said he wanted to have it so he could train with his new Demon Magical Armor Lance.

Popp goes to Matoriv to learn some new spell, revealing that he has been using Flazzard Five Flare Fingers Bomb to battle his opponents. Learning about this, Matoriv says to Popp that he should stop using it, as it was a monster spell and the reason his health is bad, is because during his time travelling with Avan, he also tried to use monsters spells for long.

Matoriv takes Popp to learn his most powerful human spell that could destroy even Orichalcum, Frizz Cracker.

As a Grand Sorcerer and former member of Avan's party, Matoriv is an incredibly powerful mage, and at one point recognized as being the world's strongest. He can more than back up these claims easily vanquishing a swarm of Dancing Flames with a single flash. He is able to easily transport himself and others with Zoom, and could send Popp flying by unleashing a burst of his own power. He is very knowledgeable about spells and the overall use of magic power in general, knowing about the spell used by Flazzard to create an energy field and its weakness, as well as having experimented with many spells (some, even forbidden) and even created some of his own. He was also able of pushing a boat with four people purely through his magic power, catapulting it at an incredibly fast speed that required wind spells as a brake.

Matoriv was also a very strict, yet effective instructor, having developed his own training regime that he deemed more grueling than Avan's infamous Special Hard Course, which succeeded in somewhat boosting Popp's magic power while making him learn Zoom, all within a single day. He was also aware of the fundamentals behind Avan's self-developed sword style, as he had Dai train in sword fighting while blindfolded, all in order for him to learn the remaining Air Slash to fully complete the Avan Strash.

Matoriv had great longevity, having lived for nearly 100 years and not showing any visible weakness or signs of decay.

Character profile from chapter 68 of the comic 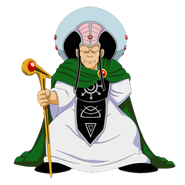 Retrieved from "https://dragonquest.fandom.com/wiki/Matoriv?oldid=213874"
Community content is available under CC-BY-SA unless otherwise noted.