Maya Mahabala (マーニャ lit. "Mānya" in Japanese, Mara in the NES localization) is a playable character in Dragon Quest IV, first appearing in chapter 4. Meena Mahabala is her younger sister, though characters frequently mistake her as the younger sibling due to Maya's more childish demeanor. She is a dancer and a mage on a quest to avenge the death of her father, Mahabala, with her sister.

Maya is very similar in appearance to her younger sister Meena, but Maya wears next to nothing, to better show off her body to her audience when she dances. Maya has long purple hair with bangs/fringe decorated with a silver hairpiece with green gems. She wears a silver bra, a long orange loincloth decorated with silver, and tan sandals. She also decorates her body with various silver accessories, such as a choker, bracelets, anklets, and an armband on her right upper arm.

Though during the game she is still grieving the death of her father, Maya is generally a very outgoing and playful, if slightly scatterbrained, person. Her occasional spells of ditzy-ness are the main source of the sibling friction between the girls. One example is Maya referring to a cow in Aubout du Monde as "Moona".

When Maya dances, she does so without inhibition, every movement filled with energy and freedom. This trait shows through in everything else she does as well, reflecting her impulsive and unrestrained nature. She has a noted gambling problem, a possible result of this trait. She finds towns without casinos boring.

Chapter 4 is set with Maya and Meena performing at a town populated almost entirely by entertainers and tourists. They use their job as a cover and the town as a base to investigate the murder of their father, a prominent alchemist. Though they suspect his apprentice, Balzack, killed him in order to steal the Secret of Evolution, they have nothing to back up their claim, and keep it to themselves for the time being.

After following the trail through several towns across the entire country, they finally confront the murderer at his castle. Unfortunately, after his defeat, his master, the Marquis de Léon, soundly defeats them in battle and throws them into the dungeon. Luckily, its only other occupant points them to a secret exit, and after they escape they flee directly to Endor.

In Chapter 5, Meena is attempting to continue her fortune-telling business, but Maya blows all the gold they'd earned on their journey at the Casino, leaving them fairly stranded in the city. Luckily, the Hero has been told to seek out his destined allies and locates Meena and Maya in short order. Maya swears never to gamble again and the two sisters join the player's party for the remainder of the game.

Much further into Chapter 5, the party confronts Balzack, at Castle Zamoksva. He has used an imperfect version of the Secret of Evolution to become Baalzack, but the party is still able to kill him, avenging the death of the sisters' father.

As a dancer rather than a warrior, Maya is physically frail, possessing practically zero Strength, and the lowest Defence and HP in the game. The tradeoff is the highest Agility, good Wisdom, a great deal of MP, and a very strong set of spells, including support spells like Sap, strong damage-dealers like Sizzle and Frizzle, and oddities like Puff!.

Maya is present along with the rest of the Chosen in the near-future version of Reaper's Peak. She is sitting in the bar, bored with how dull the town is and expressing her frustration that Meena has already started telling fortunes. After venting, she reconsiders and thinks that resting even in a boring village can be alright if her little sister is enjoying herself.

Maya appears as one of the special guests at the Quester's Rest in Stornway. This could be obtained when the DQVC was available using Nintendo's Wi-Fi Channel. When spoken to, she gives the player different pieces of her outfit for fulfilling certain conditions.

Maya is encountered in the underwater shrine. When the party first comes across her, she is dancing at the entrance of the shrine, causing the party to distrust her until Alena cheerfully greets her. Maya tells them that she, too, was pulled into their world from her own. She agrees to accompany the party after Kiryl tells her that they are travelling with a king and that he would surely pay handsomely for her assistance. She shows interest in Terry, expressing amusement towards his harsh treatment of her and is disappointed when Alena tells her that casinos likely do not exist in this world.

Maya can be summoned to perform a special attack. After leaping from the wagon, she performs Dancing Dragons, a dance which summons two fiery serpents, which she launches at her enemies. 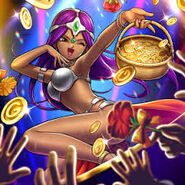