Meena is nearly the spitting image of Maya, her older sister. Compared to her sister, Meena dresses much more conservatively, though they wear identical headpieces. Meena carries a crystal ball everywhere, which she uses to tell fortunes.

Meena is an extremely reserved and quiet person, and very rational. This disposition leads her to often scold her sister for her poor judgement regarding their money, and her general laid-back demeanor. But despite these stern traits Meena is still a very kind person at heart, looking out for her sister when the two set out to avenge their father's murder, and charging only a minuscule amount for gold for her fortune-telling services.

Chapter 4 begins with Maya and Meena performing at the town Laissez Fayre, which is populated almost entirely by entertainers and tourists. They use their job as a cover and the town as a base to investigate the murder of their father, a prominent alchemist. Though they suspect his apprentice, Balzack, killed him in order to steal the Secret of Evolution, they have nothing to back up their claims, and keep them to themselves for the time being.

After following the trail through several towns across the entire country, they finally confronted the murderer at his castle. Unfortunately, despite their best efforts, his true King arrives to soundly defeat them in battle and throws them into the dungeon. Luckily, the only other occupant points them to a secret exit, and after they escape, they flee directly to Endor.

In Chapter 5, Meena is attempting to continue her fortune-telling business, but Maya blows all the gold they'd earned on their journey at the Casino, leaving them fairly stranded in the city. Luckily, the Hero has been told to seek out his destined allies and locates Maya and Meena in short order. When Meena reads his fortune, she realizes that he is the prophesied hero and immediately joins the party.

The two are briefly separated in Con Cave and are approached by demonic doppelgangers of the Hero (while The Hero also battled doppelgangers of the sisters). When coming across the real Hero, Meena is more trusting while Maya quizzed him/her. Afterwards, they regroup and find the Symbol of faith.

A while later in Chapter 5, the party confronts Balzack, at Castle Zamoksva. He has used an imperfect version of the Secret of Evolution to become Baalzack, but the party is still able to kill him, avenging the death of the sisters' father at long last.

As a spell caster, Meena posses low Strength, Resilience, and HP, but high Wisdom, Luck, and MP, and many useful healing and buff spells. In addition, she can equip a wider range of weapons and armor then a spell caster would normally have. As the sole character with access to the vital Insulatle spell, she is a crucial ally against the Lord of the Underworld and other enemies that rely on breath weapons.

One of Meena's most unique traits is her ability to read her Silver Tarot Cards during battle, with each card causing a very different effect. It seems that when you use the Silver Tarot Cards a lot, you would always draw the Fool.

Meena appears along with the other Chosen in the near-future version of Reaper's Peak, having set up shop to tell fortunes in the village, much to her sister's annoyance. When reading the palm of the Hero, she notes that she sees nothing at all in his future and cannot gaze into his soul. She notes that this means the young man has an incredible burden that he must bear, but reassures him that if he follows the path that he knows to be true, then he will find happiness at the end of the long road.

When spoken to again, Meena will mention her love of caves and tombs.

Meena appears as one of the special guests at the Quester's Rest in Stornway. This could be obtained when the DQVC was available using Nintendo's Wi-Fi Channel. When spoken to, she gives the player different pieces of her outfit for fulfilling certain conditions.

Meena first appears in the Version 1.5 update of the game, both as a quest giving NPC and as a fortune teller who can influence a player's game for up to two hours.

Meena appears as one of the new playable characters in the second game. Her Coup de Grâce is Starfall, which summons a meteor shower to strike all her enemies. She uses her tarot cards as her weapon of choice. 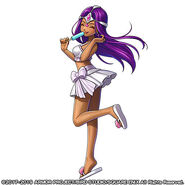 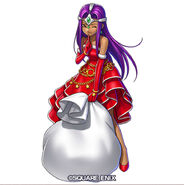 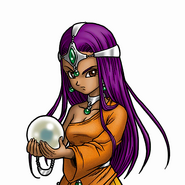 Meena in Dragon Quest of the Stars