Milly (Mireille in the original Japanese, Milayou in the localization of Dragon Warrior Monsters) is a main character in Dragon Quest VI and also appears in Dragon Quest Monsters.

Milly dresses in a blue overcoat with white pants and blouse, and a breastplate from which her yellow streamers extend. Her accessories include a tiara with matching necklace, two silver wristbands, and two plain torcs on her upper arms. Milly is repeatedly described by a wide variety of NPC's as being very beautiful and elegant, traits that have caused her great hardship in the past.

Ever polite and compassionate, Milly keeps a calming, almost motherly air about herself that belies her young age. Though no true facade, this outer personality masks the scars of a harsh childhood, and hides a deeply rooted sense of longing to be close to others. It's because of the somber past that Milly possesses an indomitable sense of courage, as evidenced by her volunteering to assist in the attack on Murdaw's Keep at the beginning of the game.

This is not to say that the young woman is perpetually serious, however; party chant and scripted cut-scenes reveal a sprightliness rivaling Ashlynn's, with Milly often succumbing to bouts of laughter and beaming smiles. Her Lucky Dip antics further reveal a strong interest in dancing, as well as dabbling in amateur fortune telling.

Milly is first seen with the Hero and Carver as they attempt to take on Murdaw at the beginning of the game. The three fail and Murdaw separates their bodies and souls and makes their actual bodies stone while sending their souls to the "dream world". The Hero and Carver will eventually find Milly again in Port Haven and it seems she's the only one who can see them. Milly takes the two to her Master, Madame Luca Luminista, who tells them how they can become visible. She sends the Hero, Carver, and Milly to the Lucid Grotto to obtain some Dream Dew that, when enchanted with a spell by Madame Luca, makes the Hero and Carver visible to others in the real world (the dew is later used on Ashlynn, as well). Milly then leaves Madame Luca and becomes the party's third playable character.

As the story of VI unfolds, the player learns that Milly and Terry both lived as orphans in Felonia when they were children. Milly was sold by her foster parents into slavery to the the local crime syndicate and thereafter to the King of Felonia as a dancer due to her remarkable beauty. NPC dialogue indicates she was also locked up in the castle dungeon for a time by the previous Queen of Felonia out of bitter jealousy simply for being 'too beautiful'. Milly later escaped, and met up with the hero before the first attack on Murdaw.

Upon Dhuran's defeat and the revealing of the true antagonist, Terry and Milly reunite. This grants her a new title and the team a powerful ally. After slaying Archfiend Mortamor, the heroes go back to their homes and Milly decides to become a Dream Seer and become the apprentice of Madame Luca.

After the game's credits, she calls everyone back to Madame Luca's house and uses her crystal ball to show them Zenithia, where the magical egg that will give birth to a bright new future is about to hatch and all look in awe as a new dawn is born.

Milly has a unique spell to her called "Crack" which is the basic Ice damaging spell. She also has spells that are similar to a priest's skill set. She excels at magic and should be put through the magic classes first to make full use of her abilities.

In the Super Famicom version, while Milly travels with The Hero and Carver to Lucid Grotto to retrieve the Dream dew, she remained entirely inactive until the they became solid through use of the dew.

In the Nintendo DS version, she takes part in battles before hand, though as an uncontrollable character.

She appears as a guest in the Quester's Rest where the party can obtain her outfit through completing her quests.

In Dragon Quest Monsters, Milly (dubbed Milayou in the game's localization) is kidnapped during the first scene of the game by a creature known as Warubou, who takes her to the Kingdom of Greatlog for an unknown reason. It is likely that the kingdom was searching for a contender in the Starry Night Tournament, though this is not hinted at. Around the end of the game, when her brother Terry enters the final rounds of the Starry Night Tournament, it is revealed that she is the current champion. Her party consists of a metal king slime, a prism peacock, and a coatol.

She appears as part of the DQVI event in the game. 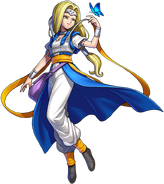 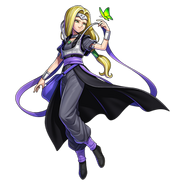 Milly dressed as Maya
Add a photo to this gallery
Retrieved from "https://dragonquest.fandom.com/wiki/Milly?oldid=204154"
Community content is available under CC-BY-SA unless otherwise noted.