Mordegon is the central antagonist of the first two acts of Dragon Quest XI. He orchestrated the destruction of the kingdoms of Dundrasil and Zwaardsrust with his army of monsters sixteen years before the story begins.

In his first form, Mordegon is a tall humanoid demon with chalk-white skin, pointed ears, two long black horns coming out of either side of his head, and a shorter one from his chin surrounded by a black marking, giving him the appearance of having a goatee. His head is almost completely shaven, save for a red spiked mohawk, and he has green eyes with yellow sclera and purple lips. He also possesses long black fingernails and he wears gold hoop earrings with dangling magenta orbs on his ears.

Mordegon wears a long purple robe with crimson edges on the ends of his sleeves and the bottom of the robe, a long magenta cloak around his neck, a purple collar with alternating black triangles in the center and lined with gold and yellow fabric, as well as a long black cloth with crimson edges hanging from the collar in front of Mordegon's robes. The edges of this cloth and the robe, as well as the sleeves, are decorated with various magical runes. He carries a tall, gnarled wooden staff with a red crystal orb near the top, a relic of his past self, which he is able to levitate at his side using magic.

A spoiler draws near! Prithee, read no further if it is thy wish to avoid being spoiled!
Mordegon is the dark incarnation of the ancient wizard Morcant, manifested when a speck of the dark powers of Calasmos, the Dark One, entered his body and rent his soul in two.

After Erdwin defeated Calasmos, he was about to lay the final blow on the Dark One with the Sword of Light, but Calasmos began speaking telepathically to Morcant, seducing him with the promise of more power. While his reason tried to push back the poisonous voice, before he could really understand what was happening, his body had already turned on Erdwin, stabbing him to death. Absorbing the dark magic, Morcant becomes corrupted by Calasmos' evil, effectively transplating the latter desire for dominion into the mage. Twisted by the darkness, Morcant loses his humanity and takes a new form and chooses a new name: Mordegon; He then began to bide his time into the shadows while setting a plan in motion to cast Erdrea into eternal darkness. Meanwhile, the sage Serenica and the knight Drustan would later seal Calasmos' body into Erdwin's Lantern, while Morcant's good soul, separated from his body, remained himself and took the form of a being called the Seer.

At some point Mordegon manipulated the chancellor of the Nhou Wat Kingdom, causing the civilization to crumble and being forgotten.

It was Mordegon who centuries later led the invasion that laid Zwaardsrust, the kingdom Drustan founded, to ruin, causing the then six years old Hendrik to become an orphan. Sensing that the Dark One was soon to be revived, Yggdrasil brought forth the boy who would be Her greatest champion—the Luminary of the present day—to the royal family of Dundrasil, the most flourishing of Erdrea's kingdoms and birthplace of Erdwin. Soon after, the Colloquy of Kings met in Dundrasil to discuss these recent events.

Unbeknownst to all in attendance, Mordegon lay in wait on that stormy night, sending monsters in advance of his arrival to exterminate the newborn. Though they had failed to do so on account of King Irwin and others who fought to end the siege, Mordegon was able to take advantage of the chaos to possess the ruler of the second most powerful kingdom in the world, King Carnelian of Heliodor. With this, Mordegon cruelly slays Irwin after the latter successfully evacuates his wife and child along with Carnelian's daughter, Jade. Dundrasil is sacked, but through serendipity, the young Luminary survives and drifts toward Cobblestone, where he is taken in by the locals and lives a normal life until his sixteenth birthday.

Using the guise of King Carnelian, Mordegon claims that the Luminary is actually the child of evil, the Darkspawn, sent to bring forth evil and destruction upon the world and orders the Heliodor knights to locate and capture him. He also starts to corrupt Heliodor second best knight, Jasper, manipulating his feelings of inferiority towards his comrade Hendrik, slowly grooming him into his best underling. Mordegon's existence and his role in the events of the story are not revealed until the Luminary reunites with his surviving family, including Jade and his grandfather Rab, both of whom were witnesses to the events of sixteen years ago. However, he is foreshadowed by a pair of grim gryphons who were about to steal the Red Orb from the Kingsbarrow on his behalf, as well as Jarvis, berating two of his shadows for letting the mage Veronica get away, as he was hoping to amass enough magic to become the right hand of the demon wizard. Dora-in-Grey even mockingly warns the Luminary and his party of his coming.

Once the Luminary and his party reach Yggdrasil, Jasper appears and subdues them using the Orb of Shadow Mordegon gave him. After Hendrik tries to stop Jasper, Mordegon makes his presence known and blasts Hendrik with a dark spell. Relinquishing control of Carnelian's body, Mordegon then steals the Luminary’s power from him and uses it to take the Sword of Light from Yggdrasil, transforming it into the Sword of Shadows to capture the Heart of Yggdrasil. Yggdrasil then violently crashes into the groung, bringing forth a worldwide cataclysm.

After the cataclysm, Mordegon, reborn as The Lord of Shadows rules the world from his Fortress of Fear, which takes the place of Yggdrasil in the sky. To secure his reign, he appoints six monsters to bring calamity to every corner of Erdrea, each possessing a Rainbow Orb of Yggdrasil: the Spectral Sentinels. To Tyriant is given control of time and illusion; to Alizarin, the sea; to Booga, magic and control of human thought; to Gyldygga, the power of alchemy; to Indignus, great strength as well as the power to weaken adversaries; and to Jasper, command of the demons and guardianship of the inner sanctum of the Fortress. The collapse of Yggdrasil also rouses a number of lesser demons to torture any who survived. Furthermore, not satisfied that many monsters came to serve him willingly, Mordegon's evil presence began brainwashing the minds of many monsters across the land, even the most meek ones, empowering them and driving them into a Vicious frenzy aganist any human or peaceful monster they came across. When Calasmos's spirit attracts Erdwin's Lantern in an attempt to rejoin with his body, Mordegon intervenes, destroying it with the Sword of Shadows thus preventing Calasmos' rebirth, and establishes himself as the supreme threat to Erdrea.

The Luminary sets off on a second quest to find his allies and to defeat the fiends responsible for the chaos post-cataclysm, in the process regaining his power that he may at last defeat Mordegon. Though this "final" fight is exceedingly brutal, the Luminary and his companions persevere. The Fortress of Fear crumbles, and Yggdrasil is revived from Her Heart being released. While peace began returning to the land not all was well, for not only the lives of many had been lost, but also many of the brainwashed monsters had yet to return to their senses, still posing a threat to all.

Unsatisfied by the great toll the battles took, the Luminary makes for the ruins of a city near Octagonia; and from there, Rab details a method of reclaiming Veronica from the flow of events that took her life. The party enters the Tower of Lost Time, but is soon struck with fear over the eventual consequences of what the Luminary must do. He does so regardless, and shatters Time's Sphere to replay the events of the Fall.

In the new timeline, Jasper is defeated before his corruption takes full hold, but Mordegon still holds sway over Carnelian and kills Jasper to maintain his cover. He then draws the Luminary and his party back to Heliodor, falsely claiming that the source of Heliodor misguidance originated from Jasper. There, as festivities are underway to celebrate the Luminary's return, Carnelian is caught while trying to regain the Sword of Light, and teleports back to the throne room, where Mordegon abandons the king's body and directly confronts the party, but he is soundly defeated. Initially in disbelif of his defeat, he soon notices the presence of Calasmos's spirit and, realizing how the Luminary stopped his plan, he accepts his fate and menacingly warns the Luminary of another who defied the flow of time. Everybody rejoice at the defeat of the demon wizard, but said festivities are short lived as, with nobody to stop it, the Lantern falls and Calasmos is free to rise anew.

The destruction of Mordegon also causes the Seer to begin to slowly fade away but not before providing the Luminary and his companions the knowledge necessary to lay low Calasmos, thus getting revenge for his corruption and the death of his friend Erdwin. 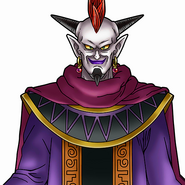 Mordegon, as seen in Dragon Quest of the Stars
Add a photo to this gallery

Retrieved from "https://dragonquest.fandom.com/wiki/Mordegon?oldid=186629"
Community content is available under CC-BY-SA unless otherwise noted.