Japanese
Mortamor is the true antagonist and final boss of Dragon Quest VI. He is the Archfiend who sends four of his greatest minions to conquer both the Real World and the Dream World.

When first confronted, Mortamor appears to be an old demon with gold orbs levitating before each of his hands. Mortamor himself states that this is merely an old man and will, upon first defeat, emerge from the two golden orbs as a hulking, winged demon with spiked shoulders. When this form is defeated Mortamor will literally cast aside his body, becoming the disembodied demonic face and pair of hands he is best known as.

Lord Mortamor, also known as the Archfiend and the Lord of Evil, sent the four Dread Fiends Murdaw, Jamirus, Gracos and Dhuran from the Dread Realm to help take over the Real and Dream Worlds. Working from atop a high mountain within the Sea of Nothingness in his Dreadlair, the Archfiend rules with an iron fist over its inhabitants. Mortamor acts mostly through his Dread Fiends, and ordered them to seal Alltrades Abbey, Medford's Manor, Sorceria, and Cloudsgate Citadel in the process, while stripping Pegaus of her power and turning her into Peggy Sue while placing her true body on top of the Pillar. He kills Eldress Isnomor just after she grants Ashlynn Magic Burst, as payback for Gracos's defeat. Later, he entices the citizens of Greedmore Valley over the supposed treasure of Supreme Sage Issac, which turns out to be an empty chest, though if the Hero and the party take too long to reach it and defeat Averill, the Archfiend rewinds the situation to amuse himself. After Blackmar is defeated, Mortamor turns the prisoners of Gallows Moor into animals and the giants to stone as a show of power and crushing their newfound hope. When the Hero and his party finally reach Mortamor, he fights them in his three forms. Despite his impressive power, he is defeated and the link between the Real and Dream Worlds vanish while the Dread Realm falls apart. As truly wicked and powerful as Mortmor might be, even his power pales in comparison to the secret boss, Nokturnus.

Even in his first form, Mortamor can prove quite challenging. However, as this is still only his first form, you will not want to use up all your MP on this form, especially as his next two forms are much more difficult. Oomph is incredibly useful for finishing him swiftly, but don't bother buffing up yet as he'll more than likely use Disruptive Wave.

Now is when you'll want to start buffing up your team. You will also want to know Disruptive Wave yourself, as he will use Buff and Oomph to make him even more dangerous. He is primarily a physical fighter, though he does know Scorch so be very careful when fighting him. After defeating him, he will 'shed this useless body' and appear as his most iconic and deadly form.

You will now have three targets, all of which will be attacking you at the same time. The head is the most dangerous, knowing Ferocious Roar and Pyre o' Fire also means that even if you're buffed you won't necessarily be safe. Lullab-Eye makes this fight incredibly dangerous as well, especially if he so chooses to put your healer to sleep. Because of this, it's generally wise to have more then one healer for this faze. He still knows Disruptive Wave, and in this form using it doesn't hinder him as much as the previous two forms, making it hard to use Buff and Oomph. After taking out the two claws, defeat the head as quickly as possible! This is very important as once the head is half-killed, it can use Magic Burst. Undead Undoer and Pearly Gates also work well against him, since he is part of the Undead family of monsters.

This claw knows Kazing, which will resurrect the other parts without fail, making this your first target, if you're not capable of taking the right claw and left claw out at the same time that is.

Mortamor appears as a Legacy Boss, obtained after completing Quest #158 (or received at special events).

Mortamor (DeathMore at the time) is present in all of his forms from Dragon Quest VI, though his hands are part of his final form now and not separate monsters. The player will have to obtain nearly all other members of the boss family to breed all of Mortamor's forms. Mortamor is also the boss behind a gate full of members of the Dragon family that is guarded by an old man and is considered by the residents of GreatTree to be the strongest of the evil lords.

Mortamor appears as a rank X monster and the last member of the Demon family.

An X rank monster in the special family. Armed with magic regenerator plus great MP and wisdom, Mortamor is one of the better X rank mages.

Like the other final bosses, Mortamor makes an appearance in Theatrhyhm Dragon Quest. His battle theme is Demon Combat from Dragon Quest VI. 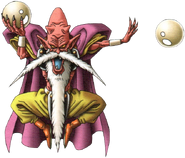 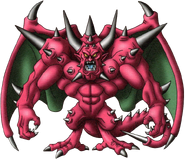 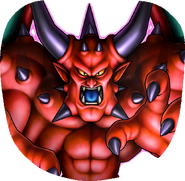 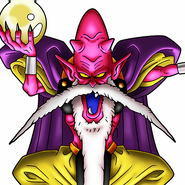 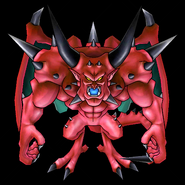 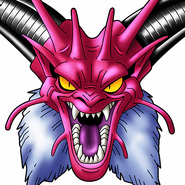