Murdaw (formerly Mudo and Mudou) is initially the primary antagonist in Dragon Quest VI. He terrorizes the world, and any who challenge him never return. As soon as the game begins, the Hero, Carver, and Milly go to fight Murdaw in his lair. Upon reaching him, he banishes all of them to the Dream World and makes them lose their memories.

Murdaw is one of the four Dreadfiends, and despite being more powerful and feared than the others he is fought first. His influence throughout the world is so great that he is assumed to be the game's primary threat. He is able to manipulate the dream world and real worlds to a degree, placing seals upon himself and the other Dreadfiends to "banish" portions of the worlds. The kingdom of Somnia intends to hunt Murdaw down, but he is able to easily move between the real and dream worlds, and the party must find Ra's mirror in order to prevent him from escaping. He turns the king of Somnia into a duplicate of himself that acts and thinks as he does, which the party is forced to defeat in order to revert the king back to his usual state.

When the real Murdaw is eventually encountered, he attempts to banish the party again, though they use Ra's Mirror in order to prevent it. Murdaw then fights the party alongside some of his minions, starting the first phase of the encounter with two Prickly Pranksters at his sides, which he can re-summon or summon Harmours in their place if they are defeated. After the first phase is over and his minions are killed, the final phase has him get serious and gain more attacks, along with the ability to attack twice per turn. Murdaw is the first enemy in the game to attack twice per turn, and is a heavy difficulty spike. His difficulty was notably reduced in the DS remake of Dragon Quest VI. The track "Brave fight" plays during his second fight, making him the only boss in the game to have unique music besides Mortamor.

While the other Dreadfiends are rarely talked about after death, Murdaw is constantly referenced throughout the game's entirety after his death. Jamirus, the next Dreadfiend fought, attempts to take leadership of the demon clan in Murdaw's absence, making it clear that Murdaw was at the very least above him if nobody else.

Murdaw appears as a Legacy Boss, obtained after battling Baramos at high levels.

You should have a Priest and/or a Sage in your party. Equip that character with the Minstrel's manuel to enable Gritty Ditty. The other three characters can be Warriors and/or Paladins. Equip these with Falcon Blades or Uber Falcon Blades. One of your fighters needs to have learned Fource abilities, equip that character with Armamentalist's Album to use Fources on all party members. Equip your healer and Fource caster with Meteorite Bracers or at least Agility Rings.

1st Turn: Cast Gritty Ditty and Frost Force on your party while the fighters use Falcon Slash.

Called "Mudou," he appears as the boss of the beast gate.

Murdaw appears in Dragon Quest Monsters 2 as the third-to-last boss. He requires the main character to collect several artifacts in order to pass, before personally "testing" the player himself. Upon his defeat, the main character learns about Darck, the true main villian of the game.

Murdaw is an S rank monster from the demon family. He's a relatively good spellcaster with respectable MP. Unfortunately, he is incapable of synthesizing into any other monster. 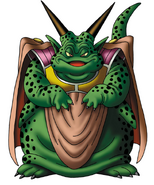 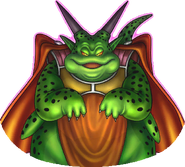 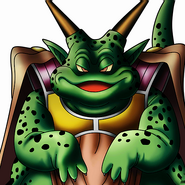 Murdaw, as seen in Dragon Quest of the Stars
Add a photo to this gallery

Retrieved from "https://dragonquest.fandom.com/wiki/Murdaw?oldid=188842"
Community content is available under CC-BY-SA unless otherwise noted.