Nera Briscoletti is a character and possible party member in Dragon Quest V.

Nera is a gentle and modest girl (a stark contrast to her DS-exclusive rude and outspoken sister Debora). Her outfit is a bright white and pink affair, its intricacies reflecting the rich family she comes from. She has long flowing blue hair which is tied by a big pink ribbon. She also adorned with necklaces, once again showing her family's wealth.

She is very obedient to her parents, often going along with her father's wishes just to see him happy even when she doesn't agree with him, she would never go against his word unless she feels that it's absolutely necessary. She is well known in Mostroferrato as a gentle soul that would help anyone in need and is quite popular with the children of the town, who see her with a mix of admiration and even a bit of a crush.

As a wife, Nera is very caring and devoted to the Hero, expressing great joy and gratitude when he agrees to bring her with him in his search for his mother and constantly showering him with praise and tenderness. She also appears to have a jealous streak when Bianca is brought up and constantly assures the Hero that she will make him as happy as he would be if he had chosen Bianca for his bride. She is arguably the most tender of the wives the Hero can choose as she constantly refers to the Hero with pet names like "darling" and also tends to cater to his needs, going as far as claiming she will bear him as many children as he wishes.

Despite having many positive qualities, she's also somewhat plagued with self confidence issues and as she tells the Hero when he picks her that "all she can be is a wife who relies on him for shelter and protection". She does however grow much more confident and self reliant during her time traveling with the Hero.

As a mother, she is very loving and cares deeply for her children, showing sometimes sorrow that she could not be there for them but she will make it up to them nonetheless, and constantly worries about their well being while traveling, as she doesn't want anything to happen to them.

The player will (in remake versions, though not in the original version) first meet Nera at the start of the game where she is still a child, seeing both her and her sister for a short time before moving on in the story.

During the time between the first and second generations, a witch in the town of Fortuna, approaches her father, saying that she is in danger of being kidnapped like other children of noble birth at the time (to prevent the birth of the Legendary Hero in the future), so to prevent this from happening, her parents send her to live in the Abbey of the Aboveall, where she remains until she turns 16 and is sent back to Mostroferrato (It should be noted however that her sister Debora also met the conditions but was not sent to the Abbey, most likely due to her rebellious and spoiled attitude).

Nera is then seen again in the second generation, where the Hero will catch her runaway dog Bingo shortly after entering Mostroferrato for the first time, she appears to somewhat remember the Hero (although she could just have just been gazing at him due to a crush). At first, she objects to her father choosing a husband for her and even tries to dissuade the suitors from the hard quest he presents to them as a condition to marry her but she changes her mind when she sees the Hero has completed the quest and gathered both the Circle of Water and the Circle of Fire. When she sees that Bianca is with the Hero, she believes that the former has feelings for him and as such would not feel right in stealing him from her, thus prompting the Hero to have to decide between the two.

If she is chosen to be the wife of the Hero, she reveals that she is in fact infatuated with him and is overjoyed she was picked. As they journey together, she becomes more confident without losing her loving side and remains by the Hero's side during his quest, although she remains somewhat dependent on the Hero for his protection (such as when she is scared by the old woman who lives in the cave in the mountain pass to Gotha) and even approval (as when she births the Hero's children, she asks him if she is a good wife to him).

Then, after they receive Mr. Briscoletti's blessing and he lets them use his ship, they use it to reach the queendom of Helmunaptra. There, Queen Cleohatra mentions that she knew the tale of Pankraz and that the Hero is actually the Prince of Gotha, so they set out to find his lost home.

After reaching the town of Battenberg on their way to Gotha, Nera collapses, but the incident is brushed off as her just being tired from the traveling and feeling faint due to being so high in the mountains. However when they reach Gotha and she collapses once more, it's revealed she is with child and that she kept it hidden from the Hero due to "knowing him", claiming that he is so thoughtful, he would stop his quest for his mother just so that he could be at her side at all times. It is when she gives birth to the Twins that she reveals that Rodrigo Briscoletti isn't actually her father (though she still loves him like he is) but that Debora is indeed her real sister and reveals that when they were children, they were told that one of them had the blood of Zenithians and as such had to be hidden so that the forces of Nadiria could not get to her and stop the birth of the Legendary Hero (though she herself has no idea of why she had to be hidden).

During the Hero's coronation however, Nera is kidnapped, but before she is taken away, she is able to instruct the children's nanny to hide herself and the children. The Hero then sets out to save her regardless of the cost, but things take a turn for the worst when Ladja (the monster who killed Pankraz) appears and turns the couple into stone statues, in which they remain for 8 long years.

Later she shows up again in generation three, in which her statue is being kept in the temple the Hero was forced to build for 10 years in slavery. After the Hero and her children are able to defeat the temple's priest, they receive the Ring of Life and with it, they bring back Nera who is able to move once again and is reunited with her children and husband after 10 years. The family is then ready to go into Nadiria to finally save the Hero's mother and defeat Grandmaster Nimzo.

If she wasn't chosen as a wife of the Hero, she will marry Crispin (Andy in the fan translation), her childhood friend, after the time skip. She does seem a bit sadden (and maybe even jealous of the other bride), but will none the less remain happy for the couple, wishing them the best.

Nera appeared as one of the special guests at the Quester's Rest in Stornway. This could be obtained when the DQVC was available using Nintendo's Wi-Fi Channel. When spoken to, Nera gave the player different pieces of her outfit for fulfilling certain conditions. The player would receive the Accolade "Well-Bred Bride" after acquiring all the pieces of her outfit.

The Luminary can visit the Briscoletti mansion on the eve of the wedding via the Echo Chamber in the Nintendo Switch version of the game. Due to the actions of a monster sealed away by her ancestor Rodolfo, Nera has been turned into an exact duplicate of her father on the eve of her wedding day. Thankfully, the groom is still away from the mansion and the monster has been located in Alltrades Abbey.

Nera is the most level-headed of the brides during the event, but still stresses that she does not want to look like her father, no matter how much she loves him. When spoken to after the fiasco, she thanks the Luminary and wishes him good luck on his travels.

Nera is one of the playable characters. She and Bianca have been mysteriously transported to the land of Arba in the Dwarven settlement of Grannet on the night before one of them is about to get married. In order to differentiate her from other playable characters, Nera uses Wands as her weapon of choice in the game, and can cast both Boom and Oomph in battle. Her Coup de Grâce is Big Banga, where she raises her wand to the sky, twirling it around to gather magic, which she then flings forward as a giant bubble to create an incredible explosion a few yards ahead of her.

Nera can be played in co-op dungeons in Heroes II, but cannot be used in the regular story mode.

Of the three possible wives for the Hero, Nera is the most able when it comes to magic and relies more on spell usage than Bianca and Debora. She mainly focuses on offensive spells that when chained together, can cause massive damage, however she is also the most frail of the three wives, so equipping her strong armor should be something players do right off the gate.

In the dancer's costume

In the Princess' costume 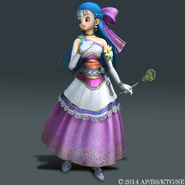 As she appear in Dragon Quest: Your Story

Retrieved from "https://dragonquest.fandom.com/wiki/Nera_Briscoletti?oldid=190915"
Community content is available under CC-BY-SA unless otherwise noted.