Demon (Unknown before using the Secret of Evolution, presumed to be human)

V
Nimzo (referred to as Grandmaster Nimzo in-game) is the antagonist in Dragon Quest V. As is the case with most of the series' villains, Nimzo is mostly referred to and not actually encountered until the end of the game, though his pawns and powerful influence do well to wreak havoc in his place. According to his Dragon Quest IX description, he possesses enough physical and mental ability to rule the world by himself.

Nimzo initially appears to be an elderly, green-skinned humanoid, though this is merely a ruse to hide his true, grotesque form: a bloated, red daemon with spear-like fangs, massive mottled and wrinkled wings, four arms, and sharp spikes all over his body, including a spiked tail.

Nimzo does not receive much backstory, but is alluded to early in the player's adventure by a ghost servant in Uptaten Towers, where monsters and spirits worship him under duress. The monsters feed by night on the children of Roundbeck and the souls of the damned residents of the castle. The Hero and Bianca sneak off to investigate the haunting, and find a haunted housekeeper in Nimzo's service, who battles them and begs for his life. From this early point, it becomes clear that a Legendary Hero can stop him; thus, Nimzo seeks to neutralise the single biggest threat against him.

To accomplish his ends, Nimzo dispatches his monster armies from the netherworld of Nadiria and sinks the floating fortress Zenithia to a lake in the mortal realm. A golden orb falls on Uptaten, and its residents pass without a trace holding this key to the castle's restoration.

Nimzo then sends more monsters of the Order of Zugzwang in an attempt to forestall the Legendary Hero's coming, with a focus on the Zenithian bloodline, of which the Hero's chosen wife is a member. His ultimate goal seems to be the submission of the mortal realm and Zenithia to his vast power.

Through the events of the game, Nimzo's carefully-constructed plot is unraveled piece-by-piece across three generations, yet his powers only grow in preparation for his battle with the Legendary Hero. By the game's end, he is confronted and defeated.

By this point in the game, the player's party should have all of its most useful spells learnt, plus the sage's stone at the ready, and the Hero's son should know Multiheal and Kabuff, while his daughter should know at least the Oomph spell. The party may also have an easier time with a cureslime-type monster in tow, and Bianca also knows Oomph if she's the chosen spouse. Elfin elixirs will also help the battle flow nicely, as will the Hero's Absorb Magic; both will help keep the party's MP in good supply.

In both forms, Nimzo has an energy wave attack that dispels all magic, and can cast an array of buff spells on himself. which the Son can quickly counter with his Zenithian Sword. Have everyone else ready to buff if the disruptor wave is used.

Nimzo's first form is fairly easy, but his biggest threat is c-c-cold b-b-breath, which can't be blocked or buffered with Insulatle. Ready the party's fastest healing if any turn uses this skill. Keep the pressure up, and Nimzo should fall in 10 turns or less.

The second form, however, is particularly nasty. Nimzo not only gains his daemonesque appearance, but loses some of the earlier spells whilst gaining Kaboom and double attacks with a crit chance. What's more, he begins with Bounce and will attempt to regenerate once his HP reach a certain point, and his disruptors are far more frequent. Even if lucky, the party may only get a couple buffs up before another disruptor hits. Stick to Oomph on the attackers--the bigger priority is dealing enough damage to counter any meditations. Meanwhile, focus on healing the wounded before trying any other skills. Bianca or Nera's Kafrizzle works very well for sneaking some extra damage in. Given time, Nimzo will fall, and the world is saved once more.

Nimzo appears as a Legacy Boss., obtained after defeating Psaro the Manslayer at high levels.

You should have a Priest and/or a Sage in your party. Equip that character with Minstrel's Manual to enable Gritty Ditty. The other three characters can be Warriors and/or Paladins. Equip these with Falcon blades or Über falcon blades. One of your fighters needs to have learned Fource abilities, equip that character with 'Armamentalist's Album' to use Fources on all party members. Equip your healer and Fource caster with Meteorite Bracers or at least Agility Rings.

The Grandmaster also tends to use a lot of magic spells, so a member with Magic Mirror can prove useful too.

First official appearance outside of Japan. Called Mirudraas at the time.

Appears as an S-rank member of the Beast family and has his current name; he appears as his monstrous, true form.

Appears as a Rank X Monster in the Legendary family with the skillset "Nimzo" and the all important trait "Double Trouble".

Nimzo appears in the musical title along all other final bosses from the Dragon Quest franchise. He uses his official battle music 'Satan', with the notes having to be struck accordingly to defeat him.

Although his credited for voicing Nimzo, its game files are actually replaced by a virus (ウイルス) but it is vanquished by the hero Luca Gotha and the slime antivirus Gootrude (スラりん). 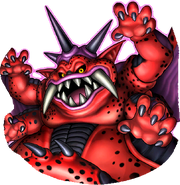 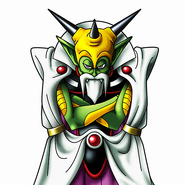 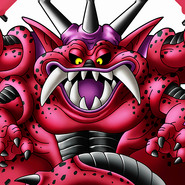