Nokturnus is a bonus super-boss originally appearing in Dragon Quest VI, serving as the game's most powerful opponent. Outside of Dragon Quest VI, he is usually the strongest monster in every game he appears in.

Nokturnus resembles a tall, well-built human male. It resembles Dhuran, but its skintone is a shade of brown, instead of orange or red.

Another difference with Dhuran is the armor; Nokturnus' armor is more complex and has more details in comparison. The color of the armor's plates is green (this green in particular resembles the color of copper when it gets oxidized). Furthermore, the armor also has some little crimson details that look like blood veins. In Dragon Quest X and Dragon Quest Heroes, these blood veins start emitting a malevolent red light when Nokturnus gets enraged or it is about to use a powerful attack. Its attire is completed with a cape. This cape is black or dark grey on the outside and scarlet on the inside, therefore differing from the one that Dhuran wears since that one is indigo on both the outside and the inside.

Nokturnus is equipped with a double-bladed weapon. In most of its appearances, this weapon has a dark purple handgrip and the blades are irregular, giving the impression that, like Nokturnus' armor, it is made of oxidized copper; however in its Heroes appearance, the blades are bigger and sharper and now violet with some golden demonic decorations.

Nokturnus first appears as a plot character during the Castle Graceskull and Armor of Orgo events. In order to defeat the Archfiend Mortamor, the King summons him using a special soup. Nokturnus refuses their request and kills most of the people in the castle. The Hero and his party observe the events, but can't do anything to affect them.

Nokturnus doesn't appear again in the main story, but can be fought after beating the game. After battling Nokturnus a new cutscence involving Terry will play in the credits, replacing the one where he finds treasure in the Amor cave. In this cutscene, Terry is shown summoning Nokturnus alone, presumably to challenge him to a solo fight. Even if you lose to Nokturnus and then defeat Mortamor this cutscene will still play.

You can either level-build to the 70s and use a standard strategy, or you can try your hand against him at high 40s.

You'll want several characters in Hero class, with two hard-hitters as Sages (Equip Echoing Hat on one) and either a Lamp Demon or a Healslime for Omniheal. The Omniheal user should have a Speed Ring equipped, as you'll only use the monster for dire situations. Keep your buffs to a minimum if you want to avoid Nokturnus' negation; he appears to use DeMagic more often when more than one character has Oomph up, or several supportive buffs are in place. If you want to avoid your buffs getting nulled, limit yourself to one Oomph and one Kabuff. Otherwise, reapply your support spells after each DeMagic.

Heroes should attack by using Gigaslash every round. A Hero with Oomph active should use PowerUp and SpiritPunch. Your Sages should unleash Magic Burst as soon as possible. Once both Sages drop their attacks, switch in your fourth Hero, who will be a dedicated HustleDancer to keep health up. If a Hero should run out of MP using GigaSlash, the HustleDancer will exchange roles with him/her. Swap in your healer at any moment you find more healing power is necessary.

Alternatively, you can have one party member master the Metal Babble and Paladin classes. That one member will act as the party's shield by using the Paladin's Defend skill, with one Buff always active to reduce the damage caused by Nokturnus. Metal Babble mastery yields high defence and immunity to several elements, proving as a very useful tank for the party. The other members should use the same attack strategies as above. Keep in mind Nokturnus has abilities that can slip by Defend, so an occasional HustleDance should be done to keep your party safe. Again, a Omniheal user is always a good idea in case your tank begins to falter. Reapply Buff on the shield if Nokturnus negates it.

Nokturnus is the hardest Legacy Boss. His grotto map is obtained from the final quest (#184). Nokturnus' weakness is Light, and is enraged whenever someone is revived.

1st Turn: Cast Gritty Ditty and Life Force on your party while the fighters use Falcon Slash.

"The god of destruction and slaughter who led to the destruction of many worlds. The name 'God of Destruction' is truly befitting of this being, whose power transcends human knowledge"

Nokturnus is a boss in Dragon Quest X

In Joker 2, Nokturnus appears as an X/SS ranked monster and is the final slot monster for the Demon family. Being one of the harder monsters to be obtained, his recipe calls for a Dhuran and a Dr Snapped.

He is also used to create the following monsters: 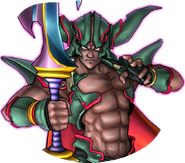 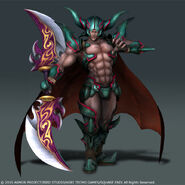 Retrieved from "https://dragonquest.fandom.com/wiki/Nokturnus?oldid=185254"
Community content is available under CC-BY-SA unless otherwise noted.