Nomeg is a boss in Dragon Quest Swords. He is one of several mirror bosses available after completing the main story of the game. Nomeg bears great resemblance to an earlier boss in the game, the Emissary of Xiphos. Both, along with Nomegeon are in the Garuda monster family.

Nomeg follows a similar attack pattern to the Emissary of Xiphos, with the main difference being his greatly increased speed and damage. Typically, the majority of damage against Nomeg is done by reflecting his projectiles back at him. Once he loses half of his HP, he'll start firing two projectiles instead of one. Once near death, he'll carry a purple Healslime in his talons.

Nomeg before the player fights him for the first time. 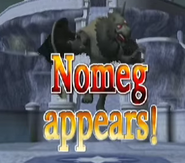 Nomeg after losing half of his HP.

Retrieved from "https://dragonquest.fandom.com/wiki/Nomeg?oldid=179931"
Community content is available under CC-BY-SA unless otherwise noted.