Nomegoen is a boss monster in Dragon Quest Swords. He is one of several mirror bosses available after completing the main story in the game. He bears great resemblance to the Emissary of Xiphos, and Nomeg both of whom are earlier bosses in the game. Together, all 3 are members of the Garuda monster family. Nomegeon is the 3rd to last boss in the game behind Valgirt Nedlog and Edahs 'Sophix.

Nomegoen shares the same attack patterns as both Nomeg and the Emissary of Xiphos, but is much faster and stronger. Most notably, Nomegoen becomes invisible after the fight begins, making it much more difficult to strike him directly. Instead, it is generally easier to rely on reflecting his projectiles back at him, although this too is difficult due to their increased speed.

Nomegoen before the player's first fight with them. 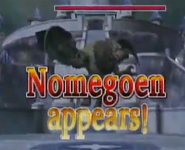 Nomegoen's invisibility makes it one of the hardest bosses in the game.

Retrieved from "https://dragonquest.fandom.com/wiki/Nomegoen?oldid=179930"
Community content is available under CC-BY-SA unless otherwise noted.