The Observatory (天使界, lit. "Angel World" in Japanese) is the heavenly home of the Celestrians in Dragon Quest IX. It is located high about the Protectorate and is accessible only by a portal, or the Starflight Express. The Yggdrasil Tree is located at the pinnacle of the Observatory.

The Observatory is equivalent to Zenithia in the Zenithia trilogy, especially the Zenith (天界, tenkai) of Dragon Quest III where the Cloudsgate Citadel is.

A spoiler draws near! Click 'show' to display, otherwise run away!
In the beginning of the game, the hero and their mentor, Aquila, are seen protecting two innocent humans; Erinn and her grandfather. They are soon made targets for an ambush consisting of a Cruelcumber and its two Slime friends. After a battle with Aquila's assistance, they are rewarded with a crystal of Benevolessence from Erinn's prayer. The hero and Aquila then return to the Observatory, as the hero must report to the head of the Celestrians, Apus Major. Aquila informs the hero that he has business to attend to, so he leaves. The hero then makes way to the second floor of the Observatory, where Apus Major requests them to give the Benevolessence to Yggdrasil, who is rooted at the top of the structure. When the hero bestows the Benevolessence to the majestic World Tree, they return to the protectorate, upon the request of Apus Major(?). Their new task is to collects a few more crystals of Benevolessence and then gift them to Yggdrasil. During their job, Aquila visits Angel Falls and the hero. He informs the player that there is a ghost lurking about and asks them to help it into the afterlife. Once this is done, the last crystal of Benevolessence is claimed, and the hero is taken back to the Observatory. Here, Yggdrasil is given the collected Benevolessence, with many Celestrians watching. An FMV occurs in which we see the hero, Aquila, and Apus Major witnessing the creation of the divine Fyggs; heavenly fruit with mysterious powers. However, the Observatory is struck by a bolt of dark energy, and the hero descends into the Protectorate, along with the Fyggs. This begins the true story of the game.

After the events in Coffinwell, the hero is taken back to the Observatory with the help of his new companion; Stella. During events prior to this point in the game, the hero witnesses a frightening nightmare. In it, a dark cloud is seen, and the hero hears a strange voice that informs them that of one their own will try to destroy mortalkind. However it also tells that one will save them. The hero visits Apus Major and informs him of the nightmare. Apus Major then says that the player must collect the fallen Fyggs and bring them back. The hero, accompanied with Stella, then descends back into the Protectorate.

The hero cannot zoom away from here.

This is where a Fygg can be collected

The Observatory is the first location available through the altar of the starry skies in the Echo Chamber. Only the zenith of the building is available to explore, with Aquilla, Pavo, and a slime present. The former two are astonished that a party of mortals made it to the realm, and doubly so that they can see the angels on top of that.

Aquila is concerned over a fygg going missing, and only has a scant clue to work with in finding it. The player is prompted with helping the celestrian, and he mentions that when he searches his mind, the words "Ruby Path of Doom" are all that appear. With this clue, the Luminary and his companions head out to the grotto and find that a Liege lizard is the culprit behind the fygg's disappearance. After defeating the dragon, it is revealed to be nothing more than a slime that wished with all its heart to become as strong as it could. Sparing the glob of goo, the Luminary returns with the fygg to Aquilla's amazement.

The Observatory appears as a board in Fortune Street, where the switches will move a district around the main board section as if it were the starflight express. 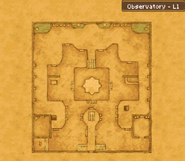 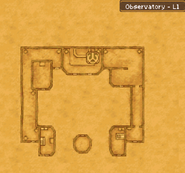 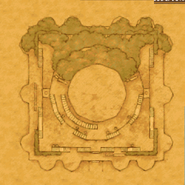 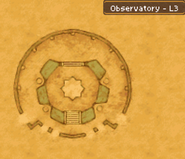 Level 4.
Add a photo to this gallery

The Observatory during the daytime.

The Observatory during the nighttime, as Yggdrasil blooms.

Yggdrasil sitting atop the Observatory.
Add a photo to this gallery

Retrieved from "https://dragonquest.fandom.com/wiki/Observatory?oldid=211466"
Community content is available under CC-BY-SA unless otherwise noted.